Millions of engaged couples turn to WeddingWire as their trusted wedding resource, with the largest directory of local wedding vendors in Washington. Easily find the best wedding services in your area with detailed vendor reviews, prices and availability for your wedding day. 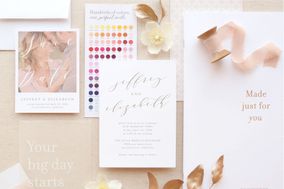 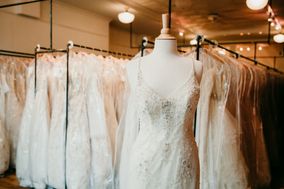 Blue Sky Bridal is a bridal consignment and sample store with locations in Seattle and Portland. We offer new, once-worn, and sample gowns at a fraction of the price. Our store has countless options when it comes to finding a designer look for less. Blue Sky Bridal works with brides to help them... (Wedding Vendors Washington) 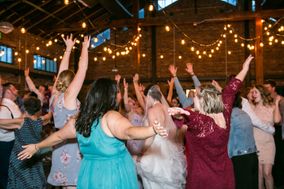 Limitless Event DJs is a Seattle-based premium DJ service providing high quality entertainment to the whole Seattle area and surround cities. Zach and Billy both have a deep passion for music and make it their mission to provide their clients with the best possible experience at their event.... (Wedding Vendors Washington) 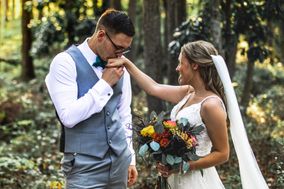 Based in Seattle, Washington, 8mm Weddings specializes in filming unconventional outdoor events. This experienced videographer offers his services for celebrations across the Pacific Northwest and beyond. Owner Luke Rodgers strives to take advantage of natural surroundings in his wedding videos. He... (Wedding Vendors Washington) 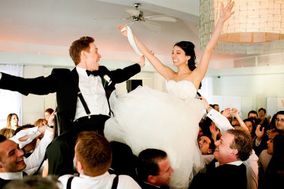 Sounds Unlimited is an award-winning Seattle-based professional DJ company that specializes in authentic experiences. With over 10 years of experience, their team of entertainment professionals will customize their services to create an atmosphere that truly reflects the personalities of their... (Wedding Vendors Washington) 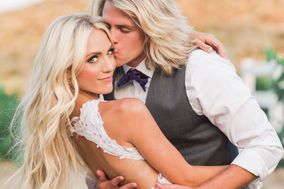 D.P. Weddings focuses on capturing emotion in a creative and meaningful way. With their cinematic, documentary, short form and storytelling style, the company’s goal is to capture the story with the best movement, angles and lighting. Ultimately, if you desire a nontraditional and emotional video,... (Wedding Vendors Washington) 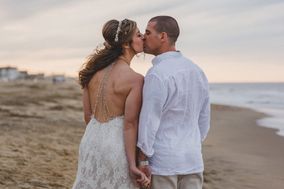 Becoming Bridal Collective is a wedding videography studio that is based out of Seattle, Washington, and Virginia Beach, Virginia. This team of videographers and photographers is passionate about telling marvelous stories through their cameras. These professionals are driven to catch powerful... (Wedding Vendors Washington) 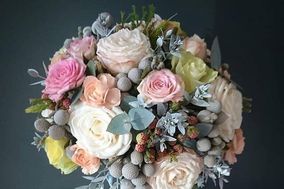 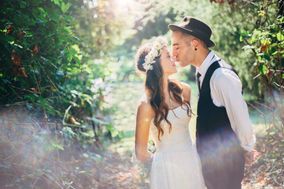 Katie Day Photos in an outdoor elopement photographer in Washington state. She works with adventurous couples who value marriage over the wedding; the couples who don't mind getting a little dirty for the sake of a good hike, and the couples who understand that marriage is a lot like backpacking:... (Wedding Vendors Washington) 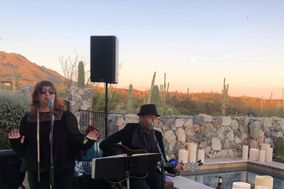 The Side Project is a wedding band based out of Seattle, Washington. This acoustic duo are husband-and-wife duo, Suzie and Ben Bradford. Having been performing together since 2004, this duo boasts a repertoire of songs that span several genres and decades. They play throughout your wedding and be... (Wedding Vendors Washington) 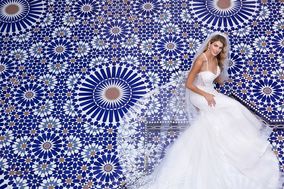 Samila & Co has been trusted by women throughout the Greater Seattle area and Eastside communities for over 20 years. At Samila & Co, our mission is to help you find truly self-expressive dresses for the most important and memorable occasions in your life. At Samila’s, we set ourselves apart and go... (Wedding Vendors Washington) 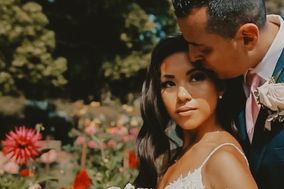 Austin and Emily Creative is a professional wedding videography service based in Seattle, Washington. Using industry-standard equipment, owners Austin and Emily have a high-definition, cinematic style of shooting and editing. Interspersing sweeping shots with candid cuts of loved ones, they create a... (Wedding Vendors Washington) 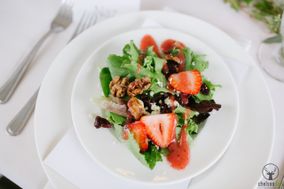 ACT 3 has been serving the Greater Seattle community for more than 30 years. We are a family-owned and operated company based in Tukwila, Washington. We provide fun, fresh catering services for every type of event, from small parties to large celebrations. ACT 3 Catering’s team of enthusiastic and... (Wedding Vendors Washington) 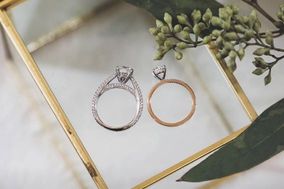 Robbins Brothers is a Seattle-based jewelry company offering a vast selection of modern, classic and vintage engagement rings. From solitaire rings to three-stone rings, princess cut and more, the jeweler has affordable ring options to fit any style. The team is committed to helping you find the... (Wedding Vendors Washington) 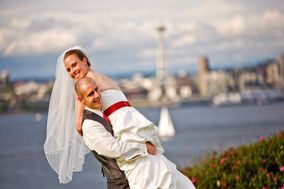 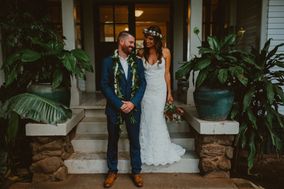 Chelsea Abril Photography is a wedding and elopement photographer based in Seattle; she does a number of weddings in Honolulu. For what should be one of the most wonderful days of your life, time will fly by quickly, but not to worry, as she’ll be there documenting it all. Chelsea Abril Photography... (Wedding Vendors Washington) 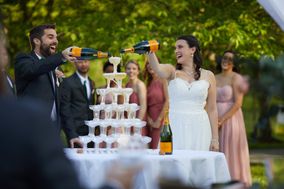 Total Wine & More is an independent alcohol retailer with stores based all over the country. Their employees are committed to their customers and to providing quality products at prices that suit any budget. Total Wine & More is pleased to offer a wide range of alcoholic delights for a couple's... (Wedding Vendors Washington) 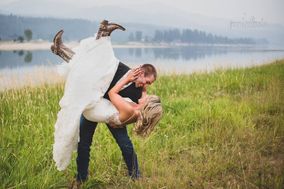 Satin N Sage Events, LLC is a wedding planning company based in Newport, Washington that has planned and coordinated 100's of events. They create truly original celebrations that make for everlasting memories, ensuring that your dream wedding comes to fruition. Experience Owner and design specialist... (Wedding Vendors Washington)

Cole Parker Media is a wedding videography company based in Sammamish, Washington, that provides services in the Bellevue and Seattle areas. The owner, Cole Aguirre, is a professional videographer who specializes in capturing unforgettable moments that will be cherished for a lifetime. Cole Parker... (Wedding Vendors Washington)

Wondrous Washington Weddings: All You Need to Know

Weddings in Washington have something for everybody - romance, beautiful natural scenery, exciting metro locations and much more. This resource page serves as your wedding planning HQ, with suggestions for photos, venues and more. Let's see what the Evergreen State has to offer!

Let's start in the city for our Washington wedding venues tour. Seattle is not only the largest population center in the state, but it's also the ideal headquarters for planning wedding excursions in and around the Puget Sound area. Breathtaking views are everywhere in Seattle, so your wedding photos never fail to impress. Some of Seattle's cool attractions include the Space Needle (a favorite wedding photo backdrop), Woodland Park Zoo, the Great Wheel, Gas Works Park (with stunning cross-water views of the downtown skyline) and Green Lake Park, where many newlyweds spend time for photos after the ceremony and before the reception. Immediately south of Seattle, two wedding-worthy cities await: Tacoma and Olympia. Olympic National Park (located northwest of Olympia) has nearby amenities for engaged couples, and rates as one of Washington's top attractions. Want your wedding to be one with nature, with everything from majestic forests to seaside views? Go to ONP! Two other National Parks in Washington attract adventurous wedding planners: North Cascades National Park and Mount Rainier National Park. The latter is named for Washington's highest peak, at over 14,000 feet. Swinging eastward along I-90, Washington's central region, the city of Yakima (via I-82) has impressive wedding venues for celebrations outside Seattle. Spokane, Washington's 2nd-largest city (population over 200,000 people), offers countryside charm for a big city, and its selection of Washington State wedding B&Bs, hotels and venues make it one of Washington's most popular wedding spots.

Depending on where your Washington wedding venue is located, climate can play a major factor. Outdoor weddings are increasingly popular, and the state's eastern half is much more compatible to year-round celebrations. When planning your Washington wedding, think on an east-west axis; the further west, the more unpredictable (and soggy) the climate. Head east, and you'll enjoy a drier, more temperate environment. Summers tend to be hot and sticky in Washington, with average July and August temps north of 75 degrees. Spokane is typical of eastern Washington weather: comfortable in the summer, yet cold in the winter - December through January average temperatures are below 40 degrees. The climate - color relationship is important for Washington wedding celebrations. Cool, neutral tones (think light blue, white and beige) work well in the state's "winter wonderland" areas, while earthy, elemental colors complement Washington's diverse natural scenery. The state flower is the rhododendron, and the flower's white and pink combination figures prominently in many Washington weddings. The western hemlock, Washington's official tree, makes up much of the state's forests, and green is quickly becoming a popular primary and accent color for celebrations all across the state. If you're going with an oceanfront wedding along the Pacific coast, or an idyllic lakeside venue, try to plan a summer or autumn wedding, when sunny skies and autumn foliage can give any wedding photo shoot unparalleled natural appeal.

Washington Wedding Costs: Adding Everything Up