ARE YOU A VENDOR?
Relatives

Father & Mother of the Groom Duties Every Parent Must Know

The mother and father of the groom do more than host the rehearsal dinner. Here is a full checklist of duties & responsibilities for a groom's parents.

Long gone are the days when the groom's parents responsibilities were limited to hosting the rehearsal dinner and showing up at the wedding. The parents of the groom are contributing financially more than they ever have before, covering 24 percent of wedding costs according to a recent WeddingWire survey. And with added financial assistance comes additional wedding planning responsibilities and input.

What is the groom’s family supposed to pay for?

Traditionally, the groom’s parents’ financial responsibilities include paying for the rehearsal dinner and honeymoon. In some parts of the country, it may be tradition for the groom’s family to pay for the alcohol at the reception. The groom’s parents may also help the groom pay for the marriage license, officiant, bride’s rings, wedding night accommodations, as well as his attire—but these items are typically paid for by the groom himself.

What are the responsibilities of the parents of the groom?

The groom’s parents responsibilities really depend on what the couple wants and needs, and how much time, effort, and money the family is willing and able to invest in the wedding. Before wedding planning begins in earnest, the couple and the groom’s family should meet to discuss expectations and make sure everyone is on the same page. The groom’s family may be involved in the planning of the actual wedding, or they may focus on the rehearsal dinner, as is customary. Read on for a helpful parents of the groom’s checklist.

1. Invite the in-laws to dinner.

If the parents of the happy couple haven’t been formally introduced, one of the first items on the parents of the groom's checklist is to contact their future in-laws and invite them over, or out, for a meal where the families can get to celebrate together and get to know one another. The invitation can be extended to siblings of the couple as well as grandparents.

2. Spread the news of the couple's engagement and where they're registered.

The father and mother of the groom are just as excited with the news of their son’s engagement as the their future in-laws, so share the happy news by updating a Facebook page, making some calls or sending emails and texts. Many friends and relatives may ask where the couple is registered, and the father and mother of the groom can point them to the wedding registry, as well as the couple’s website. It’s important to ask the newly-engaged couple’s permission to share the news on social media, as some couples prefer to keep their engagement private for a time.

Today, the list of who pays for what isn’t as black and white as it used to be. Both sets of parents and the couple should discuss how much everyone can contribute and what everyone plans to cover. As a guide, here’s a list of the expenses traditionally covered by the parents of the groom: the wedding rings, officiant’s fee, marriage license, the bride’s bouquet, boutonnieres and corsages for the immediate family, music (band/DJ), liquor at the reception and the honeymoon. The groom’s parents will traditionally host the rehearsal dinner as well. Use this as a reference but assign financially responsibilities that make the most sense for your wedding and family dynamic.

4. Ask the couple how you can help with wedding planning.

One of the most important groom's parents responsibilities is to ask the couple how they can help, and how they wants them to be involved. They may want to assign the groom’s parents specific to-do’s, or can give them some options to choose from, such as planning events over the wedding weekend and researching a specific vendor category.

5. Be available to help.

Even though times have changed and the groom’s parents are more involved, both financially and with planning duties, in opposite-sex weddings, most weddings are still overseen by the bride and her mother. As the father and mother of the groom, let the couple and your future in-laws know that you’re available to help, and what services you would volunteer for – such as DIY projects, baking cookies for favors and hosting a pre - or post-wedding celebration.

6. Put together a guest list of the groom's family and friends of his parents, and call for late RSVPs.

Once the couple has determined how many people will be invited to the wedding, the father and mother of the groom should ask how many people they can invite. Draw up a guest list of family and friends, no more than “allowed” and start gathering mailing addresses in a spreadsheet format for when the couple mails save-the-date cards and the wedding invitation. If any of the groom’s family’s guests don’t send their reply by the RSVP date, one of the mother of the groom's duties is to email or call her guests to find out if they are accepting the invitation or sending regrets.

7. Ask friends and relatives for venue and vendor recommendations

The groom’s parents should ask around for recommendations from friends and family who have recently planned a wedding, especially if the wedding will be held in their hometown, and the couple doesn’t live there. Find out from the couple what they’re looking for in style and budget and send them a list or links to the businesses that came highly recommended.

8. Ask the mother of your child's partner what she's wearing to the wedding.

The couple will make the final decision on the wedding’s style and formality, and the mother of the groom should choose her dress after the formality of the wedding has been selected – black tie, cocktail, etc. – and the colors that she can choose from. Before shopping for her own wedding-day look, it’s proper mother of the groom etiquette to speak with the mother of her child’s partner about what she is wearing, so that their dresses are complementary, but don’t match exactly.

9. The father of the groom should complement his son's wedding-day look.

When it comes to the father of the groom’s suit or tuxedo, he should wear what his son, the groom, picks for the wedding party. The groom’s dad should not wear exactly what the groomsmen are wearing, and opt for a tie and other accessories to customize his tuxedo or suit.

If the groom’s mother, and her family and friends, don’t live near where the bridal shower will be held, the mother of the groom may host a shower in honor of her future daughter-in-law. The guest list can be limited to those who are local, but should also include the bride’s mother.

11. Plan and host the rehearsal dinner

The father and mother of the groom traditionally host the rehearsal dinner, which includes choosing the location, organizing the guest list, mailing the invitations, choosing the menu and any favors. As the evening’s hosts, the parents of the groom should speak with anyone making a speech to confirm that any audio-visual requests can be fulfilled.

12. Add shots to the must-take photo list, and order albums and DVDs.

One of the groom's parents responsibilities is to give the couple a list of a few family photos they would like taken on the wedding day, and which relatives should be in large family shots. Make sure it’s part of the must-take shot list the photographer receives weeks before the wedding, and that they aren’t added at the last minute, which will mess up the day-of timeline. The parents of the groom should also let the couple know if they plan to order a parent’s album and DVD of the wedding video so their order is in the contract with the photographer and videographer, and bundled into the original fee. If the order is placed after the wedding it may be more expensive.

The groom's parents responsibilities include letting the couple know about all traditions from their family’s background – culturally and religiously – that they may want to consider adding to the wedding ceremony and/or reception. They shouldn’t assume that their son knows what they are. If the couple chooses to add any to their ceremony, and describe them in the wedding program, the parents of the groom should proofread the description to ensure its accuracy.

14. Walk down the ceremony aisle.

The parents of the groom have important roles during the wedding ceremony. At a Christian wedding, the father and mother of the groom walk down the aisle together and are seated in the front pew on the right side. At a Jewish wedding, the groom’s parents walk with him in the processional and stand next to him under the chuppah.

15. Stand in the receiving line.

If there will be a dedicated parents’ table at the wedding reception, both newlyweds’ parents should sit at that table, and the officiant and his or her spouse, if they’re invited to stay for the reception. Grandparents of the couple may also sit at the parents’ table. The couple may choose to sit with their parents, too. In some cases, the parents may choose to sit at separate tables with close family members or friends.

During the traditional parent dance sequence, the groom and his mom will share a dance. They should decide together what song they will dance to, and if they want, they can choreograph it. If applicable, the father of the groom should ask his new daughter-in-law to dance during the reception, even if it’s not part of the parent dance sequence.

Does the mother of the groom give the bride a gift?

Who walks the mother of the groom down the aisle? 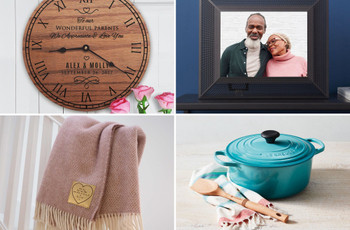 Relatives 21 Truly Sweet Wedding Thank-You Gifts for Parents or... Giving a gift to your parents on your wedding day is a lovely gesture. Here are... 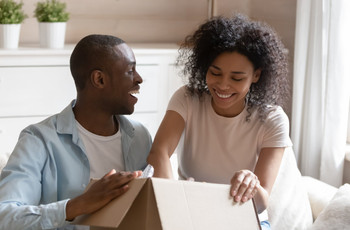 Relatives 17 Subscription Boxes for Couples They'll Look Forward to... Looking for the perfect present for your favorite dynamic duo? These are the... 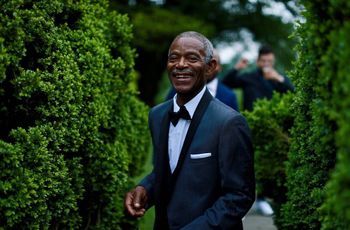 Relatives 24 Cool Gift Ideas for Your Father-in-Law Now that you're engaged, you've gained a whole new family. Looking for gifts for... 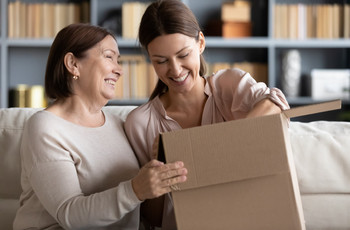