Your Zodiac Sign's Compatibility for Marriage 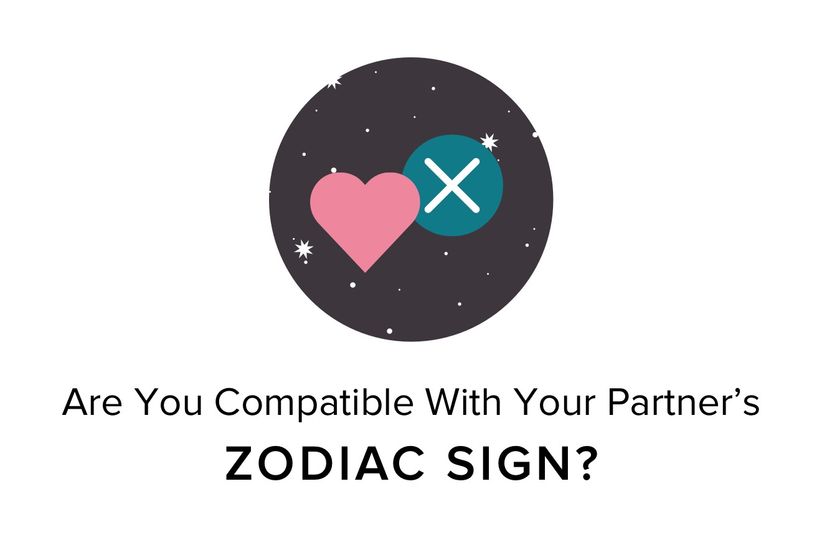 Ever wonder what it means to be an Aries or a Capricorn? While you might know that it has to do with the time of year you were born, according to celebrity astrology expert Kristin West, our zodiac sign has even more meaning to it—and our zodiac sign’s compatibility to other signs can be important when assessing our relationships. In fact, she goes as far to say that our sign represents our deepest urges, and what we truly want out of life. “Astrology gives us the opportunity to identify those deep longings, one being to love and be loved in return,” she says. If you’re married to someone of a different zodiac sign—or, perhaps the same—you might wonder what it means for your compatibility. Good news: In astrology opposites attract. “They’re complimentary, like two puzzle pieces coming together,” says West. “Opposition is not necessarily a bad thing in astrology. It’s a tension, and sometimes tension in love, especially sexual tension, is delightful.”

Here’s what astrologers believe make the best and the worst marriage matches for each zodiac sign’s compatibility and why. 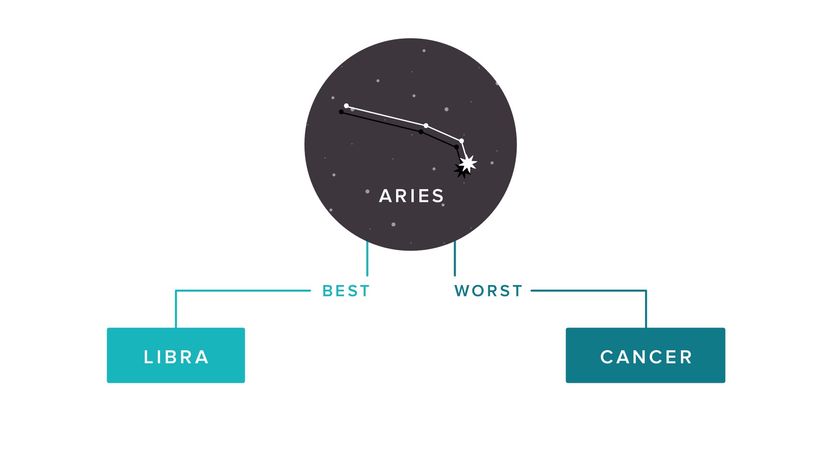 Aries is all about self-assertion, according to West. They’re fiery. “They know they’re own mind and heart, but they often exhaust themselves, and they need the nurturing a Libra mate can provide,” she says. “Libra’s airy, ephemeral, romantic side makes Aries feel like a hero.”

West reveals that Cancers can make an Aries’ blood boil. “Cancer wants the security of home and hearth, so badly to the point where Aries will feel hemmed in and hen-pecked in a marriage with Cancer, unless the Cancerian has a strong adventurous streak,” she explains. “Aries are direct people and Cancer often dances and side steps, which makes for passive aggressiveness, especially when the couple fights.”

Learn more about the Aries horoscope » 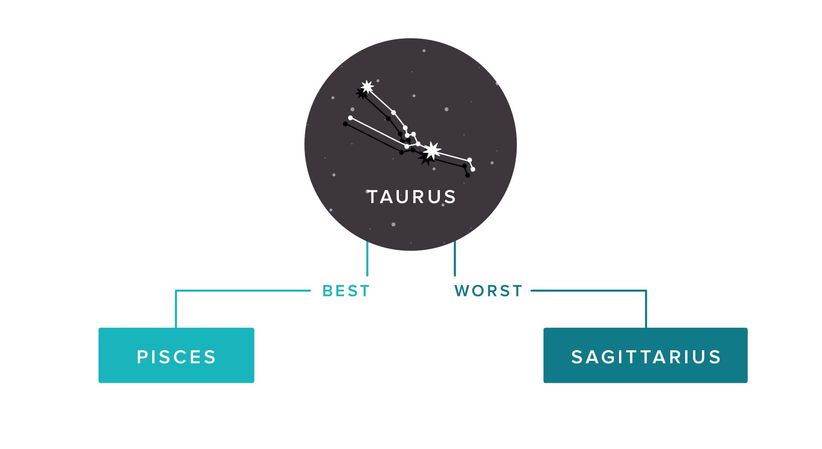 Growing old with a Pisces is a Taurus’s best bet, according to renowned celebrity astrologer, David Palmer, a.k.a. THE LEO KING—these two zodiac signs have great compatibility. “Pisces are easy going and find a way to help Taurus see more than their own world,” he says. “Pisces can also make Taurus feel confident in themselves, as they find their confidence in them.”

Palmer warns that Sagittarius is not the best when it comes to find stable ground for Taurus. “Sagittarius, love a good adventure and love of spontaneous bursts of energy, will disrupt Taurus’s desire to be grounded,” he says.

Learn more about the Taurus horoscope » 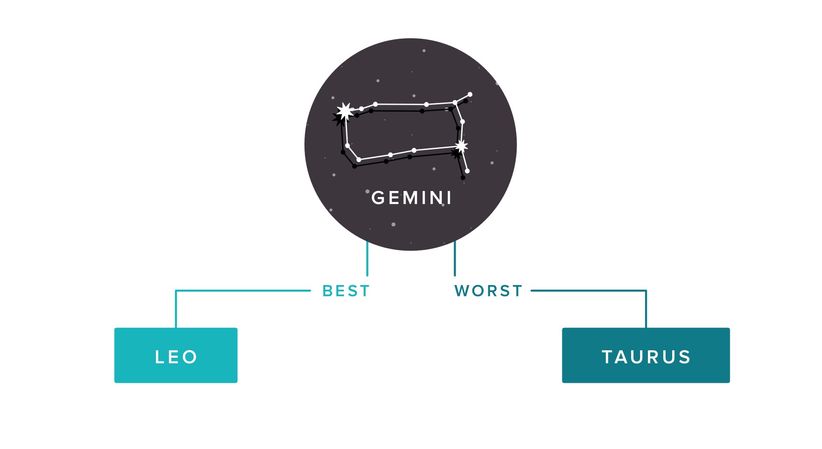 “A Gemini will go to bed, and wake up in a totally different energy in the morning—and fixed-and-fun Leo is able to handle this energy switch and keep a Gemini entertained,” says Palmer. “In many ways, this combo can be a powerhouse that last for a long time because the fun and curiosity adds to these two zodiac signs’ compatibility, even when satisfaction is never enough for them.”

Taurus isn't the best for Geminis, as Palmer warns that they can trick themselves into thinking the stability is great, while really feeling like they’re stuck. “Geminis like being stimulated, and things in Taurus's world are pretty predictable,” he adds.

Learn more about the Gemini horoscope » 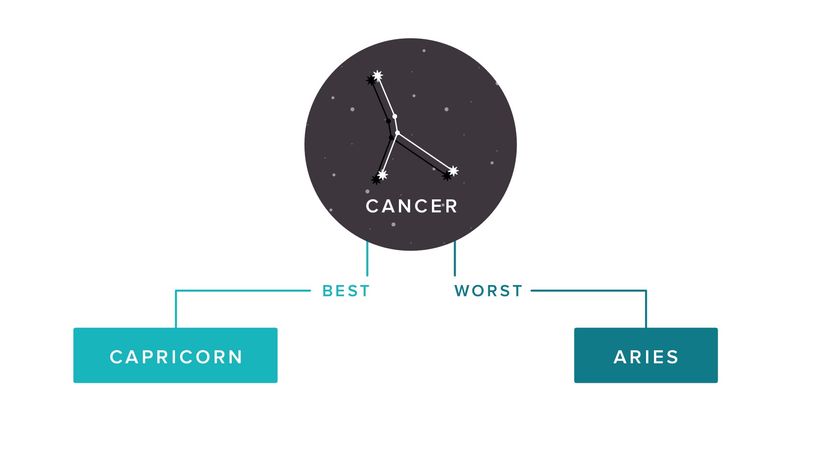 If any couple were meant to parent together, it would be Cancer and Capricorn, the mother and father of the zodiac, respectively, according to West. “These two thrive in these roles together—Cancer appreciates that Capricorn has a plan and a timeline, which is provides safety and security to the relationship,” she says.

A Cancer’s innate domesticity might not be appreciated by a thrill-seeking Aries, warns West. “Cancer wants to make a loving, nurturing home and Aries wants to skydive,” she says. “Aries has a ‘live for today’ attitude and charges right towards what they want, while Cancer often sidesteps conflict, so their priorities aren’t aligned enough.”

Learn more about the Cancer's horoscope » 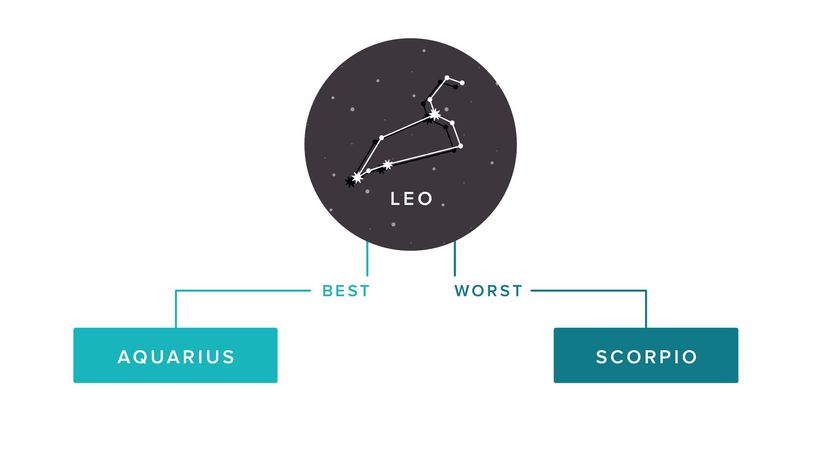 “Aquarius electrifies Leo, helping  him or her to be a beneficent ruler, a queen or king of hearts,” explains West. “Leo is willful, but can often impose on others if he or she doesn’t have a higher purpose in mind, which Aquarius opens Leo up to.”

Leo’s innate sunniness will be challenged by the often morose, intense Scorpio, explains West. “Scorpio wants to stare into the abyss of the toughest things in life—death, sex and betrayal—while Leo shies away from those things,” she says. “Leo, ruled by the sun, just wants to spread their light over everything and everyone and no matter how ebullient Leo is, while Scorpio’s heart won’t warm up to Leo’s exuberance and Leo’s pride will get injured by that.”

Learn more about the Leo horoscope » 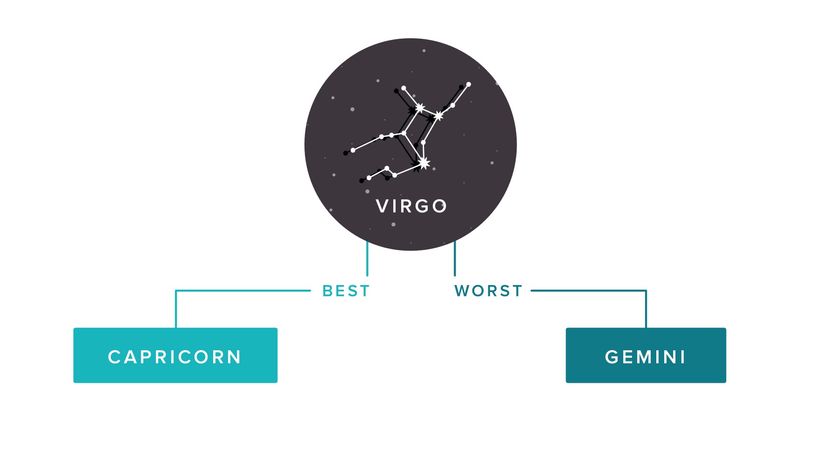 Virgo can be picky, but they have a good reason for it, according to Palmer. “They want the pure relationship that takes them out of their stress, work, and intense mental activity, but they also need some stimulation and intellect at the same time,” he says. “For this reason, Capricorn seems to be the best fit, since they know how to be the ultimate presentation of perfect and have the grounding that Virgo’s need.”

Palmer warns that Gemini tends to be too much stimulation for the Virgo. “Virgos like everything scheduled out nicely and predictably, so the change out of nowhere can catch Virgo off guard, and Gemini's can go into places Virgo's won't tread.”

Learn more about the Virgo horoscope » 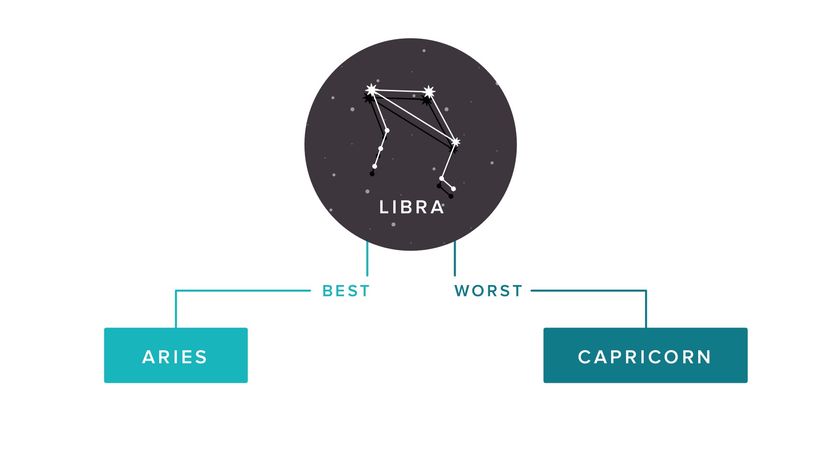 Too often Libras become entangled in anxious attachments, according to West, but Aries lets Libra be themselves. “Libras admire how well Aries know themselves, their worth and their own mind and in a healthy relationship,” she says. “These two can have a superhero and trusty sidekick dynamic, where they both learn to rely on themselves and rely on each other—ideal for these zodiac signs’ compatibility.”

Libra and Capricorn both have a lot of karma to process through when they meet, which can make for a relationship that’s simply too heavy for both partners, warns West.  “Libra won’t appreciate the seeming hardness of the Capricorn persona and the rules and boundaries Capricorn enforces, nor Capricorn's innate paternalism, mistaking it for being patronizing,” she says. “Too many rules and too little heart will hurt Libra when paired with a Capricorn.”

Learn more about the Libra horoscope » 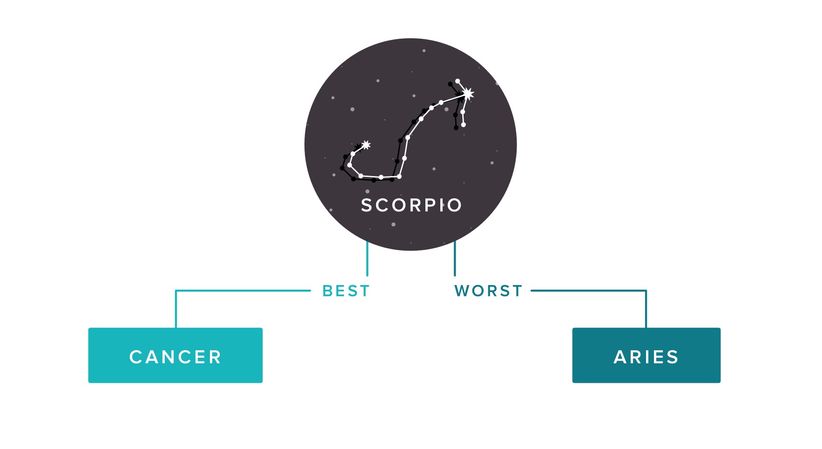 Just like the Scorpion’s stinger, which it uses to protect itself, the zodiac sign too is not represents this fearlessness of anything but his or her own mind, explains Palmer. “Scorpios need a voice of reason, and someone whom they can trust, which makes the loyalty of a Cancer their best bet,” he says. “They need that trust, and deep intimacy that is crazy enough for them to stay engaged.”

Scorpio and Aries can be a battle, warns Palmer. “Control becomes the name of this game: Scorpio has to try and understand that the Aries Warrior does not want to be controlled, and doesn't like hanging down in the Scorpion’s lair for too long.”

Learn more about the Scorpio horoscope » 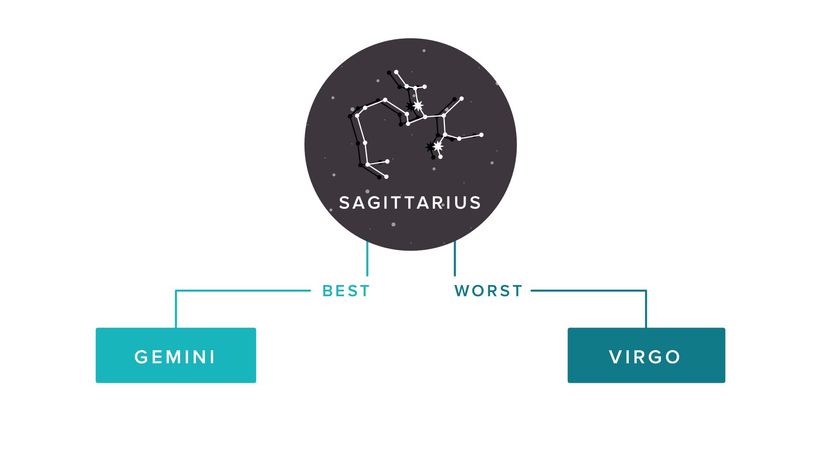 Geminis share the same curiosity and wonder as Sagittarians, which makes them intellectually compatible, according to West. “Gemini will keep restless Sagittarius guessing as these two travel far together,” she says. “Sagittarius will plan the perfect road trip for them and Gemini will write the memoir of their adventures together.”

Sagittarians desire for spontaneity makes regimented Virgo a total turnoff. “Virgo’s compulsion to count and organize, which is the backbone of civilization, grates at Sagittarius’ inherent nomadism,” says West. “Virgo will want to put down roots and Sagittarius fears settling.”

Learn more about the Sagittarius horoscope » 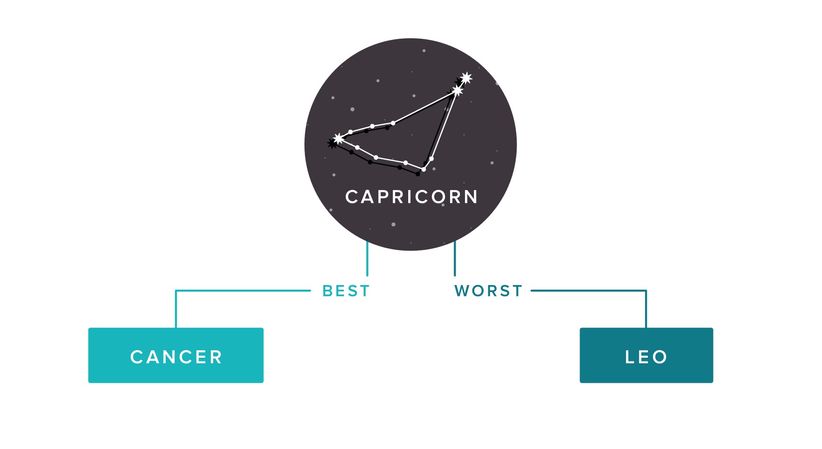 “Capricorn wants to build and structure society and conservative Capricorn intuitively knows the home is most important structure they will build, even if they’re building a Fortune 500 company too,” says West. “Capricorns love Cancer’s dedication to home—it’s one less thing for them to worry about in the hands of capable Cancer.”

Palmer warns that Leo and Capricorn can be a hard combo for love. “Leo shows up every day with a smile on his or her face, while Capricorn deals with reality,” he says. “Life is all not fun and games, and after too many moments that are serious, that are not taken seriously, Capricorn can lose their typical cool.”

Learn more about the Capricorn compatibility » 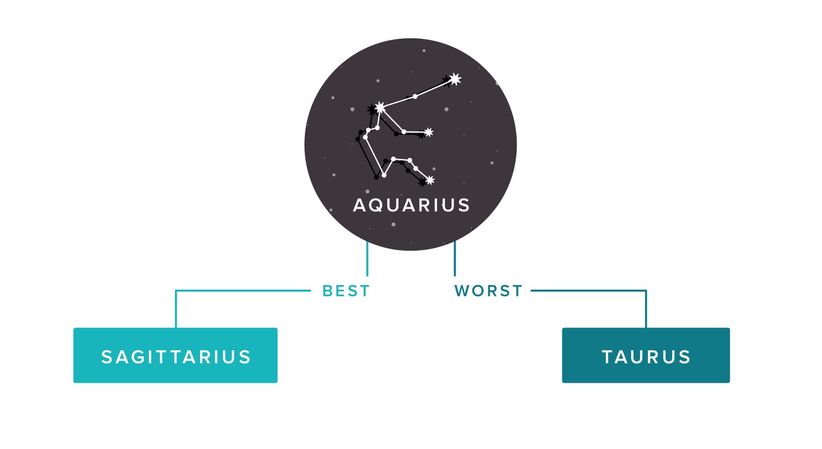 It's not easy to find a match for cool Aquarius, according to Palmer. “They do not get mad and find ways to be cool with everyone; they also have crazy ideas that they’re not afraid to express,” he says. Since Sagittariuses are similar, they’re a compatible sign. “Sagittariuses find a way to inspire Aquarius by being bold in believing in whatever they want to be.”

Aquarius may find staid, stable and often materialistic Taurus limited and limiting, according to West, and Aquarius may find Taurus’ love of creature comforts over principals off-putting at times and difficult for these two zodiac signs’ compatibility. “As a result, they can get into battles over how they consume goods and spend money,” she says. “Aquarius hates the status quo and much of what Taurus wants is to maintain what already is.”

Learn more about the Aquarius horoscope » 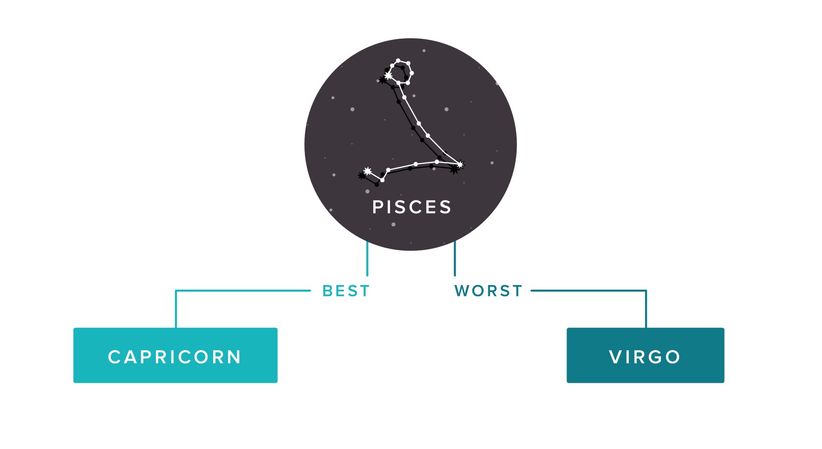 The patience of Capricorn is great for Pisces, according to Palmer, and because Capricorn seems to have the map of the oceans to help Pisces not feel so lost. “This love connection can go into old age, as Pisces feels that Capricorns are willing to take the time and feel them, understand them and help them navigate their intuitive gut instincts,” he says. “The best part is Capricorn enjoys being the Captain, and Pisces loves watching their Captain take them on their adventures of making dreams become reality!”

The sensitive fish and Virgo can be hard match. “Pisces doesn't like to be criticized, and wants to be able to swim freely,” says Palmer. “Virgo's schedules, and meticulous look at life can be overbearing for Pisces, that just wants to get over issues and go on vacation.”

Learn more about the Pisces horoscope »