ARE YOU A VENDOR?
Vows & Readings

Traditional Wedding Vows 101: The History, What They Mean, & Examples

To have, to hold — and to understand why you’re saying traditional wedding vows (if you choose to do so).

While guests may look forward to the reception, dancing and toasting, many couples remember their marriage vows as the highlight of their wedding day. This unique, one-of-a-kind moment allows duos to share how they feel about one another (a more substantial "I love you"), make promises as lifelong partners, and reflect back on their relationship. As you prepare for this exchange with your partner, it’s important to research what approach you’d like to take, whether traditional wedding vows, something more modern, writing your own personalized vows—or a mixture of these. If you’re not much of a wordsmith and you’re considering opting into the classic sentiments, here’s what you need to know about traditional wedding vows.

What do you say in wedding vows?

By definition, wedding vows are exactly what they sound like: a solemn vow and agreement between two people on the day they become legally wed. Depending on where you’re located in the country and if you are saying "I do" in a church, there may be some regulations to follow. As ordained officiant Bethel Nathan, who's been performing wedding ceremonies for over a decade, explains, some states have specific requirements written into their family laws of what a couple must say during a legally-binding wedding ceremony. And, some religious denominations have guidance around what you can — and cannot! — say while inside the sanctuary of their church. Apart from these potential restrictions, Nathan says what you say is up to you and your spouse-to-be. “Your vows and promises that you want to make to each other in those moments — be it in front of your community in a wedding or just to each other in an elopement — are for you,” she shares. “Vows can also include words of endearment. But many just focus on the promises themselves as vows.”

When were the traditional wedding vows written?

While many believe the traditional wedding vows derive from the Bible, there is no record within the many books of this Christian text, according to Tanya Pushkine, the founder of The Vow Whisperer. Instead, the first mention of marriage vows was in the Medieval Church in England. It was here that a prayer book written in 1549 with various marriage vow examples inspired the traditional phrases many couples share today. While the Bible isn’t the original source, Pushkine adds many duos choose to include verses within their ceremony or speeches, with this one being the most popular:

When are vows said during a wedding ceremony?

As you're wedding planning, you may want to know when the vows are exchanged during your wedding ceremony. It really depends on if you're hosting a religious wedding or a nondenominational one. Vows may be said at different points during the ceremony depending on your faiths, but they are often recited after the ceremony introduction and any readings, but before the rings are placed on the couple's fingers.

Who says vows first? Why?

Traditionally, the groom would say his vows first, followed by the bride, according to Nathan. However, there are no rules for that wedding tradition, and many couples now choose other ways to determine who goes first, particularly at LGBTQIA+ and nondenominational weddings. If you are becoming spouses in a church, they may enforce the "man goes first" rule, but chances are high they’ll allow you to choose your own path.

Nathan suggests the bigger crier go first so they can actually make it through their vows. “If hearing your partner’s vows will make you cry, it will then even harder to get through your own, so do yours first,” she explains. And if they’ve written personal vows, and one is much longer than the other, Nathan suggests that the much shorter one go first, as it’s less evident to folks listening in the audience than when they go after the clearly much longer one.

How do you start off wedding vows?

If you decide to go with traditional wedding vows, they usually start like this:

"I, ___, take thee, ___, to be my wedded husband/wife/spouse, to have and to hold, from this day forward, for better, for worse, for richer, for poorer, in sickness and in health, to love and to cherish, till death do us part, according to God's holy ordinance; and thereto I pledge thee my faith [or] pledge myself to you."

For many couples getting married today, the word "obey" is often omitted from the exchange. However, it was part of the traditional wedding vows, stemming from Ephesians 5:21-24, according to Pushkine. It reads: “Submit to one another out of reverence for Christ. Wives, submit yourselves to your own husbands as you do to the Lord. For the husband is the head of the wife as Christ is the head of the church, his body, of which he is the Savior. Now, as the church submits to Christ, so also wives should submit to their husbands in everything."

She also says the word "obey" does not appear in Catholic wedding vows, although we are taught to think so. In fact, it’s been removed from most historical texts, starting as In 1928, with the women’s suffragist movement. It was then that "obey" began to be replaced with "love and cherish".

However, if you want to keep this for your own wedding, it can be positive for some females (or males) who see the value in the promise. “Throughout time, the use of the word 'obey’ has had negative connotations, however, many women actually look at the word as submission of free will,” Pushkine continues. “There are some women who choose to use the word as a pledge to respect their husband’s wishes. In their minds, it is not a sign of weakness at all, but rather a full declaration of the mutual love and unconditional support as a faithful wife they are offering.”

What does to mean "to have and to hold"?

Pushkine says while some people are confused on what this part of the wedding vows refers to, it’s actually quite simple and refers to the physical embrace partner share together. As she explains, to "have" your spouse is to say that person is intimately, exclusively yours. “It’s for that person to know that having you means a full sense of pure, undiluted commitment in wedlock,” she continues. “You belong to them in a way. You are committing yourself and your body to this person in matrimony and vice versa.”

The word "hold" is a vow to maintain affection and tenderness and to cherish each other and the relationship you share. “It is the vow to give of yourself, your physical connection to this person and this person only. This does not mean you belong to your spouse, but you are fully committing to each other’s physical and emotional needs,” she adds.

What does the wedding vow "forsaking all others" mean?

If you are entering into a monogamous marriage, you are promising to give yourself altogether to each other as a faithful husband, wife, or spouse, no matter what. “This is a clear statement that intimate relations with anyone else are not part of the equation,” Pushkine explains. “In forsaking all others, we are also committing to not just be there for that person but to support them in whatever needs they may have. To make this person come first. To always put this person before other’s needs.”

How can someone figure out the best wedding vows for them?

If you are passionate about stringing together sentences that depict exactly how you feel about your partner, then go for it. But if you’d rather take some of the stress off, consider going the traditional wedding vow route, and making small edits as you both feel are necessary. “Couples are writing their own rules now. Using preset vows is now usually reserved for Catholic weddings in the church, where you are not allowed to recite your own vows. But even in those circumstances, the couple often find a way to say their own vows: perhaps at the rehearsal dinner or the reception,” Pushkine adds. “It’s up to you!” 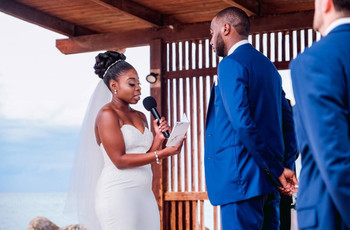 Vows & Readings What are Wedding Vows? Here's Everything You Need to Know Wondering what are wedding vows? This guide explains everything you need to know... 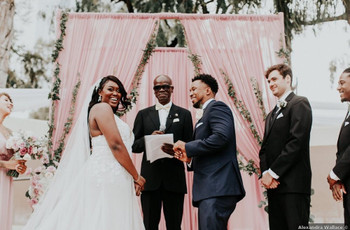 Vows & Readings Here’s How to Write Funny Wedding Vows That Are Actually... You don't have to be a stand-up comic to write some truly funny wedding vows.... 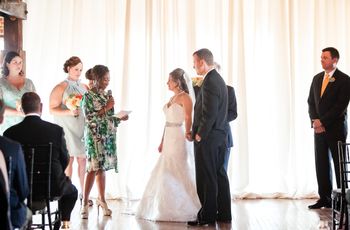 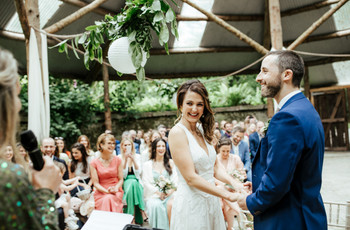 Vows & Readings These Irish Wedding Blessings Make Sweet Ceremony Readings Even if you are not Irish, you will love these meaningful Irish wedding...
See more articles