As one of ATX's most popular wedding venues, Mercury Hall Austin blends modern trends with historic charm. See how four real couples styled it on their big days!

If you're engaged and getting hitched in the Lone Star State, sorting through the hundreds of Texas wedding venues to find the perfect one for your big day is no small feat. But Austin couples are in luck! Not only is the city known for its young, trendy atmosphere and live music scene, but it also happens to be home to hundreds of wedding venues for every style and budget, including a beautiful historic chapel that dates back to the early 20th Century. Mercury Hall Austin is one of the most popular ATX wedding venues, and one look at this charming property makes it easy to see why. We've featured a handful of couples who have gotten hitched at Mercury Hall Austin, and they each put their own spin on this customizable venue. Whether you've already booked your date here and are looking for inspo, or are still on the hunt for your perfect Austin venue, these ideas are must-sees!

This 1900s-era wedding venue sits nestled on top of a quiet hill in south Austin, with views of the surrounding Hill Country. The building was originally constructed in 1904 as a house of worship for the frontier town, Mercury (hence the venue's name), and served as the local church for nearly 80 years until a new structure was built in 1996. A year later, the building that's now known as Mercury Hall was moved to where it is currently located in Galindo. It was carefully restored to match its historical roots, and now earns consistent five-star reviews as one of the best Texas venues.

Mercury Hall Austin is one of several downtown wedding venues, making it a wedding location that's easily accessible for you and your guests. Even with a central location, the venue offers seclusion and tranquility thanks to landscaped gardens, 200-year-old oak trees, and bamboo surrounding the property. A 2,218 square-foot hall is the main event space, but you can also utilize the venue's outdoor courtyard, terrace or lawn for your wedding. The indoor space is bright and airy, with beautiful stained glass windows that let in a lot of natural light. The walls are floor-to-ceiling white shiplap, which is the perfect blank slate for any wedding theme or style and puts it on the list of most charming Texas wedding venues.

Hillary and Steven chose a blush and gray color palette featuring vintage-inspired details with a hint of glam. The bride stepped outside of the box with a blush wedding dress, while the groom and his groomsmen kept their attire relatively casual with vests and button-down shirts, sans jackets.

The couple opted to keep their decor minimal, allowing the venue's beauty to speak for itself (Mercury Hall's stained glass windows are one of the most unique details you'll find when it comes to Texas wedding venues). Banquet tables at the indoor reception were covered in crisp white linens with cheerful Gerbera daisy and garden rose centerpieces.

Kerry & Paul: Classic With a Bit of Sparkle

Kerry and Paul hosted their wedding reception at Mercury Hall Austin after saying "I do" at nearby St. Catherine of Siena Catholic Church. They decorated the space with white and gold details, focusing on metallics and sparkling accents. A long head banquet table, which ran down the center of the room, was lined with dozens of candles to create an ultra-romantic setting.

The couple's classic wedding theme was a perfect match for Mercury Hall's timeless charm. Kerry and Paul's two adorable pups even made an appearance at the reception!

Sarah and Dane made their wedding totally their own by including fun and upbeat details. The day began with an outdoor ceremony on the venue's terrace. During cocktail hour, the couple surprised their guests with a VIP appearance by two beer burros—a trend that's been all over the Texas weddings scene for the last few years.

If you needed proof that bright wedding colors can still be clean and modern, take a look at this stylish couple.

Victoria and Justin chose an overall classic aesthetic but added whimsical details to make the wedding more trendy and inviting. They opted for gray table linens instead of the traditional white, and accented each table with quirky centerpieces featuring mercury glass vessels, candles, and even small dinosaur figurines! 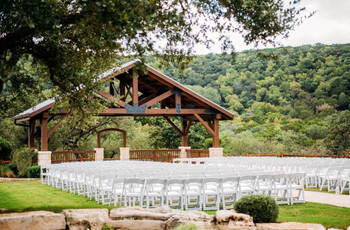 Places to Celebrate 10 Wedding Venues in San Antonio for Any Budget or Style No matter your style or budget, there are plenty of photo-worthy wedding venues... 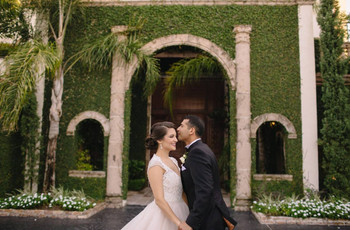 Places to Celebrate 13 Super Unique Wedding Venues in Houston, Texas From renting a museum for the night to borrowing a whole historic town for your... 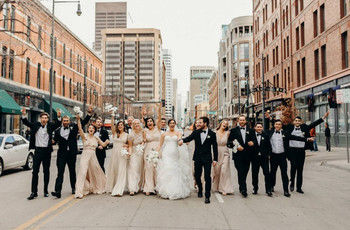 Places to Celebrate 16 Historic Wedding Venues in Denver, Colorado Make your mark on Colorado history at one of Denver’s many historic wedding... 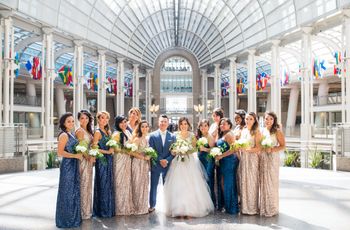 Places to Celebrate The Absolute Best Wedding Venues in DC Explore the best of the best wedding venues in the District with options to suit...
See more articles