The After-Engagement Feelings Your Parents Probably Have

Are you parents acting a little weird after you've announced your engagement? Find out why they may be acting out of the ordinary. 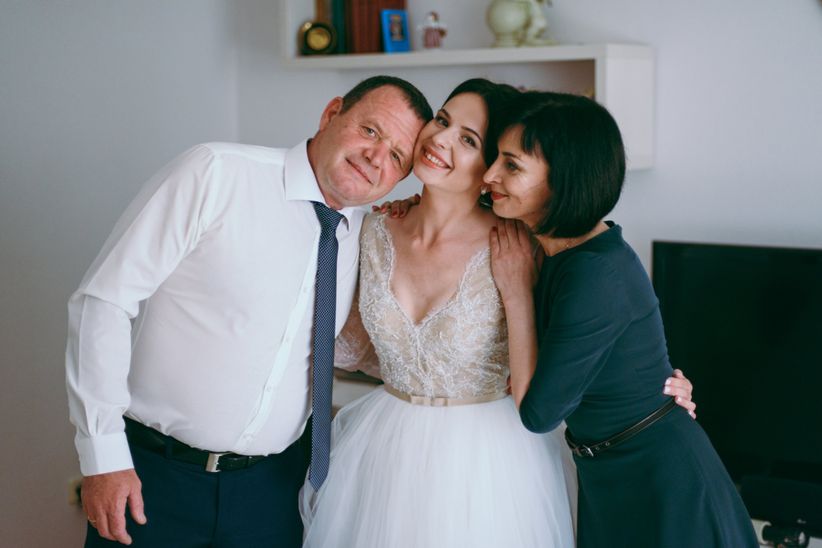 After the confetti settles and the reality (and wedding planning) sets in, you can trust on life mostly returning to normal—minus that new sparkly thing you get to stare at when you get bored during your commute to work. But it’s possible that not everyone in your life will return to their original states now that you’re a spouse-to-be—like your parents, most importantly, who might have some, er, interesting after-engagement feelings. It can be easy to get annoyed, but listen: A child marrying is a big deal for parents, and even if a proposal is expected, the change in status can make even the chillest mom and dad freak out a little bit.

Instead of losing it, read on for a little more insight on your parents’ after-engagement feelings and what exactly might be making them so shooketh.

They weren't expecting it.

Maybe your ‘rents didn’t think you were the marrying kind. Or weren’t in on the engagement talk you and your partner were having. Or just plain didn’t know the two of you were so serious. Whatever the reason, blindsided parents are the number-one cause of your parents having some difficult after-engagement feelings. Parents pride themselves on knowing what’s going on in your life, and if a milestone hits that they aren’t expecting, it can throw them off-kilter even while they are super-happy about it! How to bring them back to normal? Catch them up to speed. Arrange a hangout with your new fiancé(e) and all parental parties involved, and share your engagement story, your wedding plans, whatever else you feel like telling them—once they feel in the loop, they’ll snap out of shock-mode.

Back in your folks’ day, it was the parents who paid for weddings—and that was that. If they’re anything like my parents, they’re not abreast in the latest wedding trends (what, like they have lives?) and they don’t know that these days, who pays for what in a wedding is much more flexible and diplomatic. Sensing that your parents are experiencing immediate sticker shock the moment you send them your ring pic—even if you have no intent of making them pay for the whole shebang? Hash out your budget ahead of time with your partner, annotating which parts you hope to pay for yourselves and which parts you hope to have some help with, then talk it over formally with your ‘rents so they know they’re not on the hook for the entire bill. Once they realize they’re not paying for everything, they’ll likely drop the anxiety and join the party. 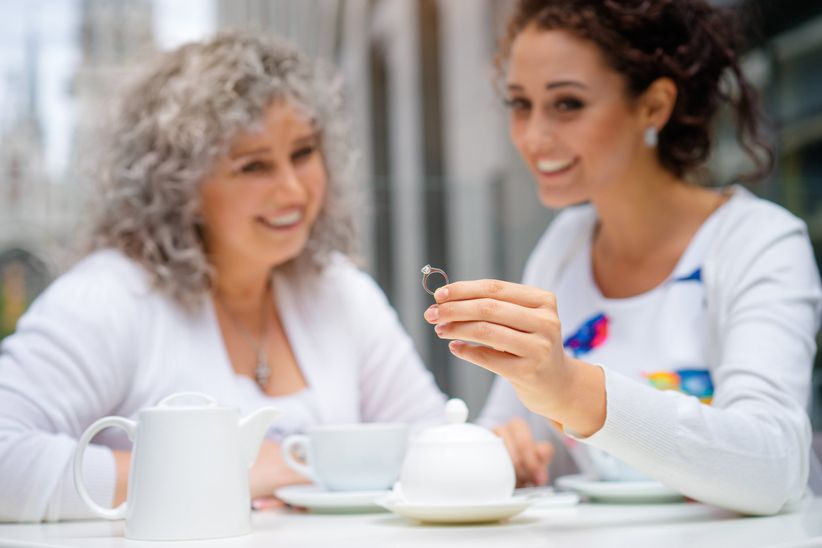 They weren't included in the proposal.

Some parents are cool with hangin’ on the sidelines, some want to be front and center. If yours are of the latter camp, and they’re not present for your one marriage proposal of all of life, they might be a little hurt—which might make them have some interesting after-engagement feelings, even though they’re really happy for you. (Notice a theme emerging here?) Step one is to not feel the least bit bad about not including them in your proposal (first of all, you likely had very little say in how your proposal went down…)—you’re a grown-ass human being and you’re allowed to have a parent-free marriage proposal! Step two is to do damage control after the fact. An engagement party, with lots of planning help from them, or any sort of celebration that involves them, might ease the pain a bit and make them feel more involved. Furthermore, a nice, grown-up conversation where you explain that them missing your marriage proposal doesn’t mean you love them less, and that they’ll be at the wedding where it really counts, will help a lot. In fact, as a person planning a wedding who is about to make a lot of tough decisions, you should get comfortable with these types of conversations, and with holding your own and standing by your decisions—trust me, it’ll be worth it.

They're already stressed about your wedding.

It’s your parents’ job to worry—but some moms and pops take that responsibility a little bit too seriously. If you’re a child of the worrying kind, it’s possible that the moment they find out you’re engaged, they’re already running through all the incredibly stressful wedding moments that lie ahead in their minds—even though your wedding is a year and a half away. And, honestly, can you blame ‘em? Weddings can be stressful for parents! Their kid is officially growing up, for one, not to mention all the planning, logistics, drama, speeches, dances, crying and shopping that comes with the territory. If you sense your parents (ahem, especially your mom) are already becoming bogged down by wedding stress the moment the question is popped, feel free to give them a license to chill. Remind them that this is going to be your wedding, and most of the stress involved will be your stress—they’re meant to be honored guests, not your wedding planning apprentices! Reassure them that you’ve got this, and that it’s their choice to make this a joyous occasion rather than a stressful one. Finally, lead by example—if you don’t immediately become consumed by wedding stress, chances are, your parents’ stress will quickly ease up, too. 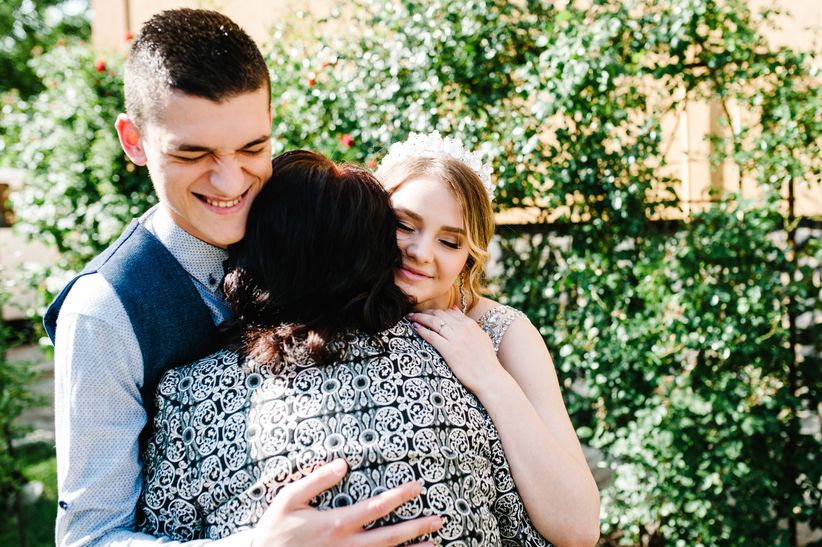 They aren't sure about your partner.

This is a doozy. It can be tough when your parents don’t see what you see in your partner—especially when they suddenly advance from boyfriend or girlfriend to spouse-to-be—but, unless you’re also having doubts, it’s important that you don’t let their opinion get you down. Carry on, soak in your joyful after-engagement feelings, and feel free to ignore the negative vibes of your parents or anyone else. If they see you happy, eventually they’ll wise up and realize that that’s what matters—not their petty notions about your partner. And if they really can’t get past it, it’s worth a sit-down discussion where you simply say: “We’re in love, we’re getting married, please be happy, thanks.” The end!

They're not acting weird at all.

Emotions are running high following your engagement! Hormones are going nuts, you’re feeling all the feels, and you’re feeling extra sensitive to everyone’s reaction to your big news. It may feel like your parents are acting strange when they’re nothing but perfectly happy for you, and no, being this paranoid doesn’t make you insane. In a lot of ways, becoming engaged is not only an experience for you, but also for your parents—it can feel like a lot of pressure to impress them, or make them happy, or make them excited with your big news, and if they don’t react the exact way you imagine they always would, it might end up making you feel like you disappointed them. Try to talk yourself out of this—if there’s no logical explanation for your ‘rents being freaked out by your engagement (such as logical explanations 1-5, above), then you’re probably letting your emotions get the best of you. Detach from engagement mode for a bit, take some deep breaths and reconnect with your family as yourself, rather as a newly engaged person, and you’ll feel better in an instant. 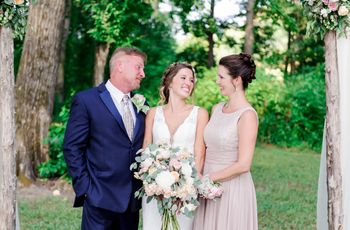 Etiquette 10 Wedding Planning Talks You NEED to Have with Your Parents... Make sure that you run these items by your parents before moving forward with... 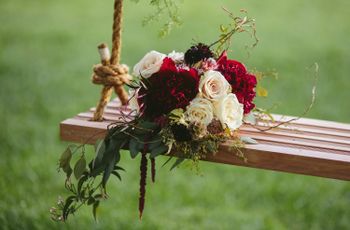 Etiquette What to Do If Your Parents Won’t Attend Your Wedding Although it can be heartbreaking not to be able to share your wedding with your... 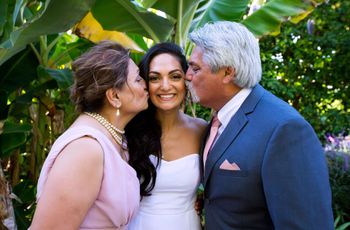 Etiquette 10 Ways to Make Your Parents Happy on Your Wedding Day Your wedding is as important for your parents as it is for you — here are some... 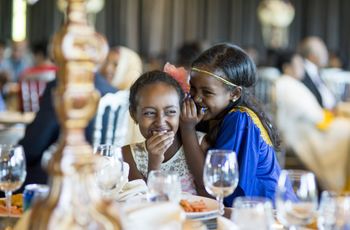 Etiquette Do You Ask Parents About Having Their Child in Your Wedding?... Chantale via Twitter asks: Should you ask the parents first about having their...
See more articles