We are a youthful, energetic wedding band based in NYC that provides the sound and song selection of a DJ, with the electric energy of a live band!

Our mission is to revolutionize the wedding entertainment industry by standardizing love as an expectation for booking and working with a band in the Tri-State area. Our founders, Drew and Erin Coles, formed the band for their own wedding (in the midst of hustling their butts off getting degrees in music and business respectively), and care deeply about creating a beautiful event for each and every couple.​ 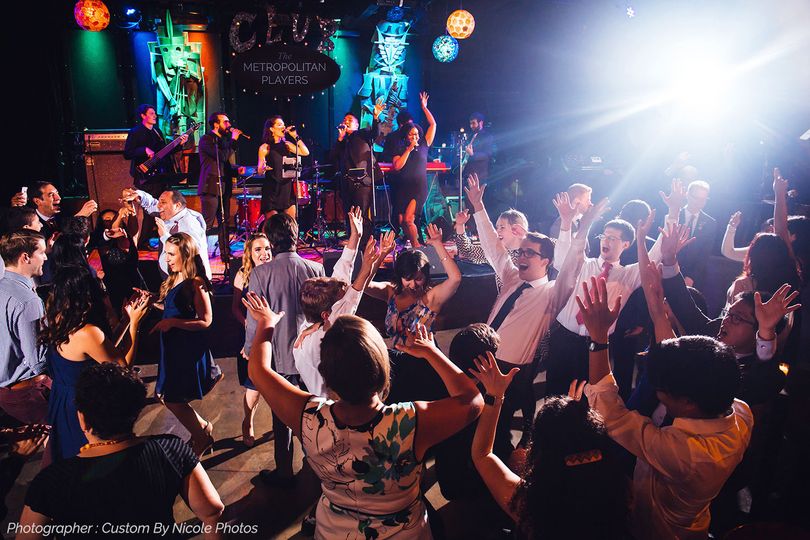 Erin is the manager of The Metropolitan Players, and is one of the driving forces behind the band. Erin was born and raised in Upstate New York and received two bachelors degrees from the State University of New York at Potsdam as a double major in Theater and Business, as well as a minor in Psychology. Upon moving to New York City, she went on to obtain her MBA, all while founding and running a business with her husband.

Not only is she obsessed with weddings, her greatest passion is working one-on-one with brides and grooms during the planning process. Erin gives special care and attention to all of her clients to ensure that each wedding turns out exactly how the couple has envisioned.

Erin's responsiveness, consideration, support, and warmth towards her clients has been a key player in The Metropolitan Players' recent recognition: The Wedding Wire Couples’ Choice Award every single year from 2016 to 2020, The Knot Best of Weddings Award from 2015 to 2020, and a coveted place in The Knot Hall of Fame

Drew is the Musical Director of The Metropolitan Players. He is a multi-instrumentalist, composer, arranger, producer, and educator, and performs regularly on the New York City scene. Drew's wide range of musical knowledge and ability to cross stylistic boundaries make him a valuable asset, and he has shared the stage with jazz masters Wynton Marsalis, Jim Snidero and Mitch Frohman, among others. He was most recently seen on Good Morning America, Live with Kelly and Ryan, and iHeart Radio Live Sessions alongside pop singer/songwriter Erin Bowman.

In addition to the Metropolitan Players, Drew continues to use his expertise in studios, on stages, and in classrooms across New York City and along the East Coast.

Alex is originally from Richmond, VA, and now resides on Long Island, NY. Her favorite food is tacos, and one goal on Alex's bucket list is to visit every National Park in the US!

"My favorite part of being a coordinator is getting to be part of someone's special day, and seeing them enjoy themselves! Also, being around such a positive, talented group of musicians is the best!"