ARE YOU A VENDOR?
Relatives

My Sibling and I Got Engaged at the Same Time. Now What?

Is your brother or sister on the road to getting engaged—while you're planning your own wedding? These sibling engagement etiquette tips are a must-read.

Weddings are one of the most exciting and monumental times in people’s lives, whether they themselves are getting married, or one of their family members. It also requires a lot of time, energy and commitment from everyone involved. When more than one wedding is going on at a time, say within a few months of each other, things can get a little—how should we put this?—hectic.

There’s simply so much to get done, with so many events to plan (and attend) that it can be overwhelming for some families to manage more than one wedding at a time. That being said, however, you can’t always put a timestamp on life milestones like getting engaged, so it is certainly not unheard of for two siblings, for example, to get married around the same time.

Many siblings are born within a few years of each other. “While early childhood milestones such as new teeth, walking and first day of kindergarten seem eons apart when siblings are 2, 4 and 6 years old, synchronized engagements at 24, 26, and 28 are commonplace,” says Jodi R.R. Smith, owner of Mannersmith Etiquette Consulting, in Marblehead, Massachusetts. What’s more: She notes that social phenomena, such as engagements, can be contagious—it’s common for them to spread within friend groups as well as siblings.

While there are a few drawbacks to two siblings getting engaged around the same time, including the exorbitant cost of two weddings, sibling rivalry, as well as the turmoil and stress of getting to know two new families at once, there is no hard-and-fast rule when it comes to whether or not simultaneous weddings in a family should happen. There are pluses, too, including potential cost savings, easy-to-figure-out guest lists, as well as doubling up on vendors.

If you and your sibling got engaged around the same time as each other, here are some etiquette dos you should follow.

Don’t be surprised when certain family members have strong feelings about two weddings happening close together. Whether it’s your mom, your grandfather, or your nosy aunt, there will be conversation surrounding the timeliness of everything. Try your hardest to understand everyone’s point of view, as it may require them to make personal sacrifices in order to allow the two events to play out together, notes  Maryanne Parker, etiquette expert and founder of Manor of Manners.

The key to sibling engagement etiquette, according to Smith, is to be mindful of your brother or sister’s feelings. “Each couple is entitled to their moment in the spotlight, so having a big surprise-production proposal during your sibling’s engagement party is not kind,” she says. Instead, she suggests attending the engagement party, enjoying your time and planning your own engagement a few weeks later.

If certain relatives need to travel from other parts of the country or other parts of the world, know that they may not do so twice in one year. “You shouldn’t be disrespectful when your favorite aunt can’t attend both weddings,” says Parker.  “Flexibility is the most important thing in this type of scenario.

Smith recommends that both couples and their parents sit down together for a discussion about planning. “While spacing out the weddings may seem ideal, depending on where the friends and family are located, it may be kinder to have weddings closer together,” she says. “Asking people to travel a long distance in July and then again a few weeks later in September is cost prohibitive for your guests.” Instead, she recommends planning the weddings very close together or far, far apart. 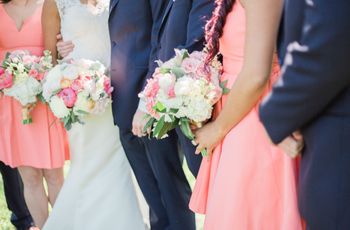 Relatives The Sibling-In-Law Etiquette Guide If your future spouse has brothers and/or sisters, you may find yourself facing... 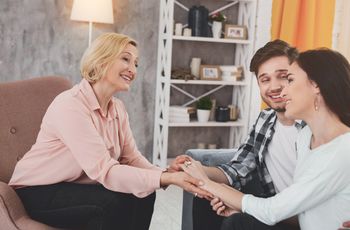 Relatives 5 Questions You Should Be Prepared to Answer When Meeting... Meeting your partner's family for the first time is a big deal. Here are the... 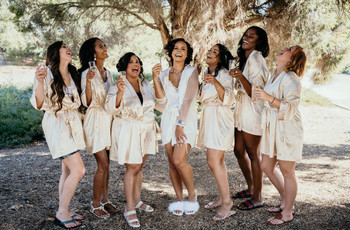 Wedding Party First-Time Bridesmaids vs. Veterans: The Biggest Differences... The first-time bridesmaids and the vets are sure to handle your wedding a bit...