ARE YOU A VENDOR?
Invitations & Stationery

How to Address Wedding Invitations So You Don’t Offend Anyone

An envelope that's not addressed properly can actually annoy your guests. Here's how to address wedding invitations so everyone's happy.

Real talk: Figuring out how to address your wedding invitations might be one of the most tedious parts of wedding planning. Even if you’ve got a stationer or calligrapher to do the dirty work for you, you still have to corral all of your guests’ names and mailing addresses, which can take a few days short of a lifetime (don’t even try to imagine what it was like doing this before the Internet, it’ll make your brain hurt). And still, just when you’ve think you’ve hit a rhythm and have totally got this whole addressing-150-envelopes thing on lock, you still aren’t out of the woods yet, because guess what? There are rules here, too! And I don’t just mean using pretty penmanship.

Check out these tips on how to address your wedding invitations to make sure you’re ticking all the right boxes for drama-free, non-offensive envelopes.

First, a few general do’s and don’ts when it comes to how to address wedding envelopes:

Do: Use full names. Always use full, given names as opposed to nicknames.
Do: Give distinction where it’s due. Your friend from undergrad didn’t spend the past 10 years of school and infinite dollars to not be called a doctor at every possible opportunity. Include titles like “Dr.,” “PhD,” “Esq.,” where appropriate, and if you’re not sure, ask!
Do: Fully spell out street names, like Lane, Court, Street, Road, etc.
Do: Spell out numeric street names. For example, write Sixty-Seventh Street, rather than 67th Street.
Do: Include serious partners and plus-ones by name whenever possible, rather than writing “and guest.”
Do: Keep in mind who’s divorced. Just like you shouldn’t leave new partners or titles off the envelope, calling someone a Mrs. when they’re not anymore might ruffle some feathers.

Don’t: Forget to be super-clear about if children are invited. Include them on the envelope by adding “and Family” after their parents’ names.
Don’t: Abbreviate street names. Write out the full name of a state, rather than using its two letter abbreviation.
Don’t: Abbreviate North, South, East, West.
Don’t: Abbreviate the generational suffixes “Senior” or “Junior.”

Married couple, different sex, same last name
List on the same line. Use the “Mr. and Mrs.” title, followed by the man’s full name, or write out each person’s first name. You can put the woman first, if you prefer.

Married couple, same sex, same last name
List on the same line. Use the title “The Mesdames” for two women and the title “The Mssrs.” for two men, followed by both first names and the couple’s last name. If you don’t want to be this formal, simply substitute the title “Mrs. and Mrs.” or “Mr. and Mr.”

Married couple, different sex, different last names
Write out each full name with “Mr.” or “Mrs.” Man or woman can go first, depending on your preference.

Married couple, same sex, different last names
List on the same line. List both full names, each preceded by the appropriate title, on the same line with the “and” conjunction.

Two married doctors
Use the title “The Doctors” or the abbreviation “Drs.,” followed by their last name.

The Doctors Lilian and Thomas Wallis

Different sex married couple, woman is a doctor who uses maiden name
Same as above, but include woman’s last name.

Different sex married couple, same last name, man is a doctor
List both names on the same line. Use the title “Dr. and Mrs.,” followed by the man’s full name.

Married couple and their children (Under 18)
Use the rules above for the first line. On the second line, list the children’s first names in order of age.

Married couple and their children (18 and Over)
Children who are over 18 should receive their own invitation, addressed to them individually:

Unmarried couple
List each guest’s full name, preceded by the appropriate title, stacked on two separate lines. It doesn’t matter whom you list first; when in doubt, go alphabetically. If it’s a long-term couple, you may put the couple’s names on the same line.

For a guest with a plus-one
Preferably, you would know the name of the plus one in advance. If not, you may include “and guest” after the guest’s full name.

An unmarried woman
Use the “Ms.” title, followed by her full name.

An unmarried man
Use the “Mr.” title, followed by his full name.

A widowed woman
Ask a loved one if the woman would prefer to be referred to by her married name or her late husband’s name.

A divorced woman
Both the “Ms.” and “Mrs.” title are acceptable, followed by her first and last name, whether she kept her married last name or goes by her maiden name.

A married couple, same last name, man is a judge
List both names on the same line. Use the title “The Honorable and Mrs.,” followed by the man’s full name.

The Honorable and Mrs. Roger Allen 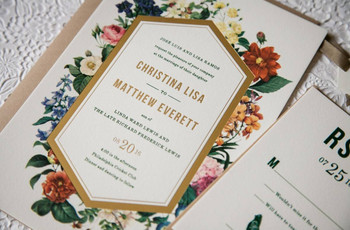 Invitations & Stationery Your (Stress-Free!) Guide to Wedding Invitation Wording Wedding invitation wording doesn’t have to be complicated. With these... 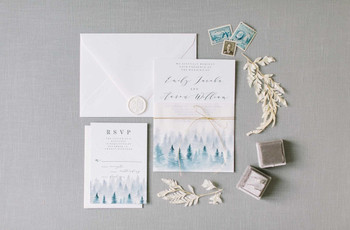 Invitations & Stationery 27 Winter Wedding Invitations That Are Modern and Chic Kick-start your celebration with these stylish winter wedding invitations that... 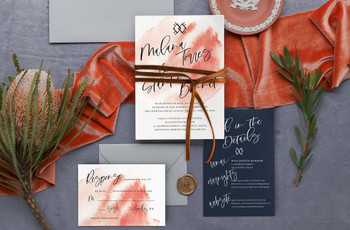 Invitations & Stationery 25 Unique Fall Wedding Invitations Your Guests Haven't Seen... Autumn is the most popular time of year to get married, but your upcoming... 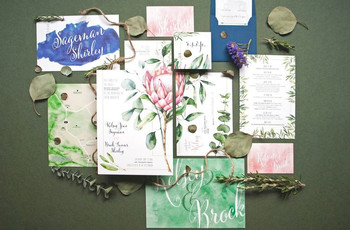