Wedding caterers have an important role to play—making sure the food and drink are top notch on your big day! Whether you’d prefer a casual buffet-style meal or a formal plated dinner, wedding caterers will create a delicious menu your guests won’t soon forget. Be sure to read reviews on WeddingWire of wedding caterers in Kansas City before booking! 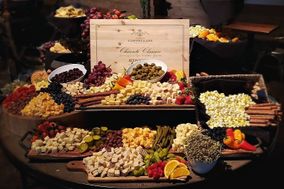 Based in Mission, Kansas, Hy-vee is a provider of wedding catering, cakes, and sweet treats. Their team of artisans can craft a wide range of scrumptious delights, ranging from a tower of doughnuts to tiered wedding cakes. Whatever couples desire on their wedding day, Hy-vee can help make it... (Wedding Caterers Kansas City) 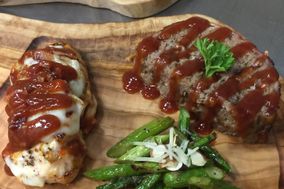 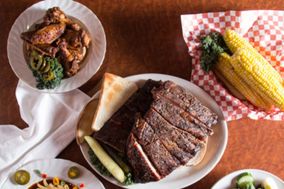 RJ's Bob-Be-Que Shack is a wedding catering business based out of Mission, Kansas. Bob Palmgren and his wife Denise decided to open up this operation after the former had spent years working in the culinary sphere. His time spent as a chef means that he possesses the know-how to prepare a... (Wedding Caterers Kansas City) 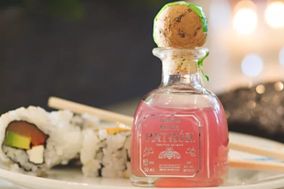 My name is Nate Lawrence with PB&J Restaurant group and PB&J Catering. First, I would like to thank you for the opportunity to allow PB&J to cater your event. Named one of Kansas City’s top 3 caterers, we have catered for President Bush, President Clinton, Countless CEO’s in Kansas City’s largest... (Wedding Caterers Kansas City) 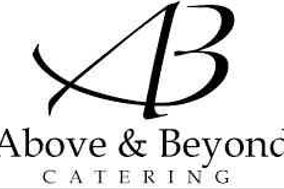 Above & Beyond Catering is Kansas City’s choice for an elegant, full service caterer. We bring you the perfect marriage of experience, a passion for food, and a flair for event planning. All of our quality dishes are prepared by scratch in our professional kitchen, with only the freshest of... (Wedding Caterers Kansas City) 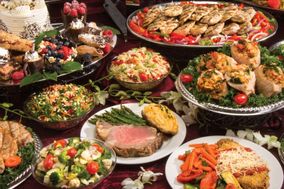 Constantino's Catering is a wedding catering company based in Prairie Village, Kansas. Their beautiful presentation and remarkable value make this hometown favorite and an ideal choice for wedding receptions, rehearsals, or showers. They offer a mouthwatering variety of meals, beverages, and... (Wedding Caterers Kansas City) 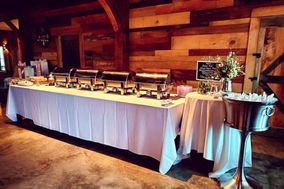 Based in Cameron, Missouri, Akey’s Catering is a wedding food and beverage service. A family-owned business, Dale and Joann Akey are committed to making the planning process as straightforward as possible. This company was founded in 1996 and takes a homemade approach to meals. Dale and Joann... (Wedding Caterers Kansas City) 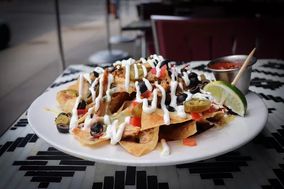 Michael Forbes Catering has been delighting the palettes of Kansas City for over 30 years. Because of our vast experience with different cuisines, our Chef can create a menu designed with your personal taste and budget in mind. Whatever your needs, you will be provided with delicious food,... (Wedding Caterers Kansas City) 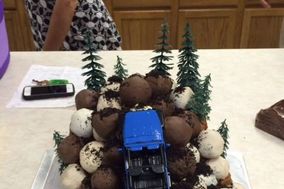 Smokin G’s Catering is a wedding-catering company based in Alma, Kansas. Since 2008, husband-and-wife team Gary and Peggy have had the pleasure of catering to numerous wedding receptions. They create custom menus based on to-be-weds’ culinary preferences, serving up relaxed yet refined dishes... (Wedding Caterers Kansas City) 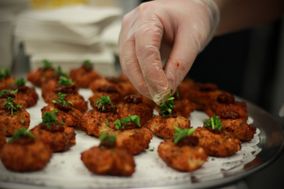 All Cuisine Catering is a wedding catering company based in Kansas City, Missouri. Serving the greater Kansas City area, this caterer is committed to providing innovative dishes. Emphasizing beautiful presentation, their menu will excite foodies who appreciate dishes curated to appeal to the eyes as... (Wedding Caterers Kansas City) 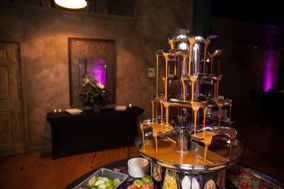 Based in Harrisonville, Missouri, Scrumptious Fountains is a chocolate fountain rental company that caters to the Kansas City Metro area. This establishment has products that present an ideal solution for groups as small as 20 to those that are larger than 300 individuals. With fountains ranging in... (Wedding Caterers Kansas City) 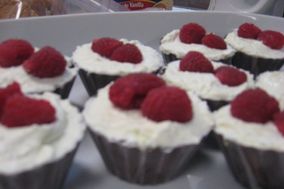 A gourmet wedding catering company in Edgerton, Kansas, Terrace Catering is a mother-daughter duo that love to craft incredible tasting foods for their clients. One of the most important aspects to planning your wedding day is choosing the caterer. By booking Terrace Catering, you are assured both... (Wedding Caterers Kansas City) 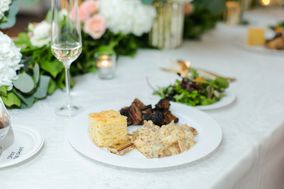 Crazy Good Eats is a wedding catering company based in Olathe, Kansas. This catering company specializes in delicious and familiar Kansas City-style barbecue that will surely satisfy you and your guests. This team is happy to cater gatherings of all sizes, from intimate, backyard parties to grand... (Wedding Caterers Kansas City)

Based in Overland Park, Kansas, Marigold's Food Truck & Catering is a mobile catering business. An ideal alternative to traditional wedding feasts, this unique dining experience is sure to last in guests' memories. Inspired by her mother's resilience and cooking skill, the owner of Marigold's Food... (Wedding Caterers Kansas City) 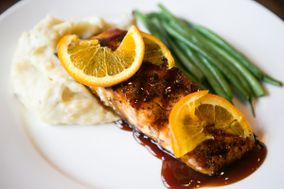 We cater to a wide variety of menu options and specialize in wedding and rehearsal events. From Italian buffet service to elegant plated fare, we do it all. At Plaza Catering, we provide the top tier in ingredients, creativity, and service for every event. Services Plaza Catering offers tons of... (Wedding Caterers Kansas City) 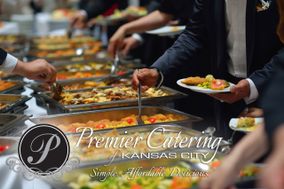 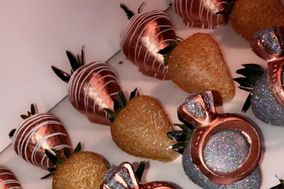 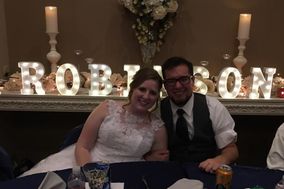 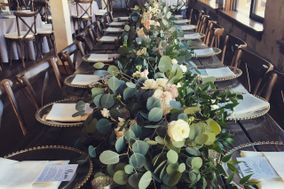 Using only the best ingredients available and possessing our unconditional desire to provide the best service possible, it is our goal and promise to make your special event one that will never be forgotten. Each and every menu is uniquely designed around your event. We don’t believe in preset,... (Wedding Caterers Kansas City) 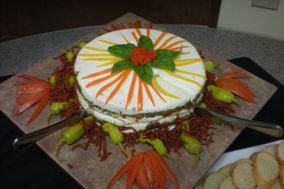 The definition of Ambrosia is: 1) from Greek Mythology, the food of the gods. 2) something especially delicious to smell or taste. That's our food!!! It's incredibly delicious! Our Chefs prepare your food as though they were preparing it for their family. Everything is made to order from scratch.... (Wedding Caterers Kansas City)

How much does wedding catering cost?

Food and drink are a major part of the wedding experience (no one wants hangry guests!), so it’s no surprise that you’ll spend a big amount of your total budget on your wedding catering. The average wedding catering cost in the U.S. is about $4,000 with most couples spending between $1,800 to $7,000. Note that wedding catering prices do vary widely depending on your wedding’s location and many other factors, like guest count—but no matter where you’re getting married, delicious and plentiful food is essential to an amazing wedding reception experience.

Costs displayed in graph are based on spend from thousands of couples who recently reported pricing for this service within their WeddingWire review. Pricing varies based on factors including, but not limited to, vendor’s experience, level of expertise, event guest count, date, and geographic region.

What is included in a wedding catering package?

What are the different ways to serve wedding reception food?

When determining your wedding food cost, a big factor will be how you’re planning on serving the meal. There are a few serving style options for weddings:

What is the average wedding catering cost per person?

Is a wedding reception buffet always the cheaper option?

Most of the time, a wedding reception buffet is indeed less expensive than a plated dinner. While you’ll pay less in staffing and rentals for a buffet-style meal, you’ll need more food since guests are serving themselves. To keep your buffet budget-friendly, avoid serving costly foods (shrimp, for example) buffet-style or have a staffer on hand to serve your guests from the buffet to keep the portions under control.

What is the average cost of alcohol for a wedding?

Alcohol can comprise a major part of your total wedding catering cost. In general, the average starting price in the U.S. for bar service at a wedding is $15 per person.

See other couples' reviews of wedding caterers in Kansas City

Ambrosia Catering of KC
8 reviews
Caleigh S.
5.0
We hired Ambrosia Catering for our brunch wedding reception and were so pleased with the food and the service! Because we got married in ...

Local Seasons Catering and Events
3 reviews
Samantha S.
5.0
Local Seasons came in at the last moment and saved our wedding day. The food was always my number one priority. We had been through a number ... 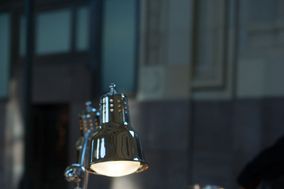 Brancato's Catering
137 reviews
Lauren V.
5.0
Brancato's was an absolute pleasure to work with! Emily Rempel was our Brancato's coordinator. From our very first tasting/meeting with her ...

Your Guide to Choosing A Wedding Caterer In Kansas City

Kansas City is the largest city in Missouri and is a metropolitan melting pot of art, culture, and history. Thanks to its contributions to music, particularly to the genres of jazz and blues, it is the only city in the United States to hold the title of ‘A City Of Music’, granted by UNESCO. Kansas City boasts a beautiful cityscape, with over 200 fountains scattered throughout, offering idyllic wedding photo opportunities at every corner.

Catering and Cuisine in Kansas City

vKansas City is well known for its foodie culture, in particular for its expertise in cooking barbeque. The city contains more barbecue restaurants than any other area in the US, perhaps since the idea of mixing molasses into barbeque sauces was born here. With a wide variety of wedding caterers, couples can choose between the city’s traditional cuisine and a variety of fare including other classic American dishes, Mexican, and Italian. If your venue does not provide a bartending service, it might also be worth checking out wedding caterers who can provide both food and drinks to save you some extra time and money.

Alternatives In The Gateway To The West

If Kansas City isn’t quite what you have in mind, try heading down to Jefferson City, just a couple of hours away. While smaller than its neighbor, Jefferson City is Missouri’s capital, and contains many of the state's noteworthy historical buildings such as the Missouri State Capitol and the Governor’s Mansion. Set on the Missouri River and with 18 vast parks totaling 1,400 acres of picturesque scenery, the city offers a picturesque location for outdoor and waterfront nuptials.

What To Expect From The Weather

Kansas City benefits from a warm and temperate climate, with the mildest months being May, June, and September. During July, temperatures can reach up to an average high of 90.1 degrees, while the coldest month is January when they can dip as low as 22.4 degrees. This is something that you and your wedding caterer might want to consider when planning your menu, as while no-one wants an outdoor barbeque during the rainy season, everyone loves a cookout while the sun is shining.

Get Wise For Your Wedding

There is an incredible variety of great wedding locations in this city. Barn and farm locations are quite popular here, for couples wanting to make the most of the surroundings without straying too far from the city lights. Whether you want to exchange vows in a hotel, park or celebrate on a rooftop, there’s something for everyone.

Kansas City contains plenty of hotels to choose from, with many offering block booking options so you can reserve rooms for your guests as well.

Other Wedding Vendors near Kansas City