Duncan's illustrious career began as a Corporate Event Planner.  In the years that followed, DUNCAN gained notoriety as a Catering Manager for luxury hotels such as the Portman Hotel, the Pan Pacific Hotel and the Fairmont Hotels in San Francisco & Chicago, and as General Manager of the Julia Morgan Ballroom at the Merchants Exchange Club in San Francisco.  Before striking out on his own, Duncan gained prestige as Catering Manager for Weddings & Social Events at the historic Westin St. Francis Hotel in San Francisco.

His impressive accolades have given him credentials to recognize him as an independent Food Editor, Restaurant Critic and a Contributing Writer for San Francisco, Chicago and New York media publications.

Spanning decades in Wedding, Corporate and Social Event Planning, his passion has taken him to new career heights that led him to create F. DUNCAN REYES EVENTS BY DESIGN and is renowned as the event industry’s most Premiere Wedding and Event Planner " Extraordinnaire.

Duncan is also a member of The National Association of Catering Executives-San Francisco Chapter, and was voted last April 2010 as NACE’S “Member of the Year” 2010.

Committed to creating special events that are as distinctive as his clientele, he creates and executes flawless affairs with sophistication and panache yet with a personable approach that represent your own unique style, exceeding expectations for the planning and design experience. The myriad of Weddings, Corporate and Social Events & Fundraisers accommodate all requests large and small with a touch of class.

With years of experience conceptualizing ideas, themes and budgets for all events, his capabilities and resources are endless in an effort to create memories that will last a lifetime. 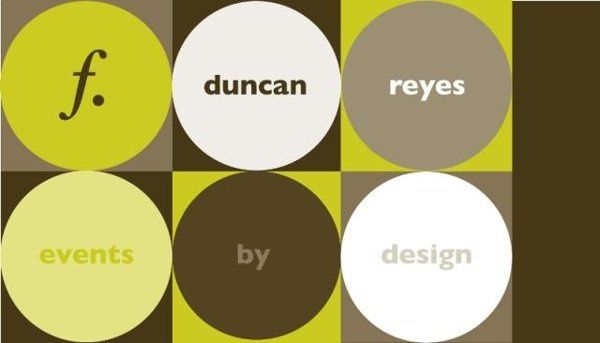