Wedding caterers have an important role to play—making sure the food and drink are top notch on your big day! Whether you’d prefer a casual buffet-style meal or a formal plated dinner, wedding caterers will create a delicious menu your guests won’t soon forget. Be sure to read reviews on WeddingWire of wedding caterers in Miami before booking! 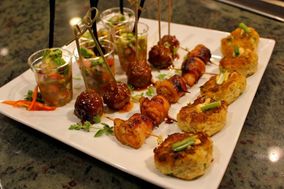 Hugh's Catering provides full-service catering in Fort Lauderdale, Florida. For over 40 years, the culinary team has been dedicated to providing gourmet food and custom menus to the area. Chef McCauley learned alongside his father and then studied culinary arts in Paris. He and his team will... (Wedding Caterers Miami) 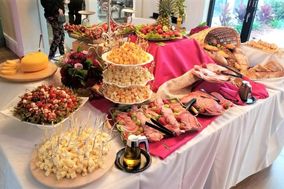 Rollatini Italian Restaurant and Catering is family owned and operated since 2006. Rollatini is proud to serve the South Florida community with exceptional cuisine, staff, and customer service for all wedding events. Chef Victor, along with his family, provide a personal touch to your special day.... (Wedding Caterers Miami) 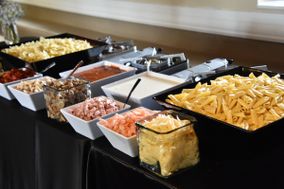 Event Design Productions is a quality wedding catering service and event planning company based in Miami, Florida. This family-owned-and-operated business has been creating unforgettable events for over 28 years and has gathered a wealth of knowledge and experience during this time. From delightful... (Wedding Caterers Miami) 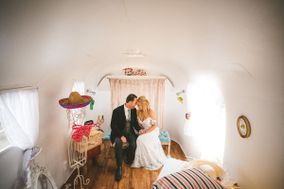 Exquisite Catering & Events is a wedding catering company located in North Miami, Florida. This company is known for their boutique-style approach and creativity. They also offer event planning. Their in-house planners will coordinate your wedding day cuisine and also the décor, lighting, floral... (Wedding Caterers Miami) 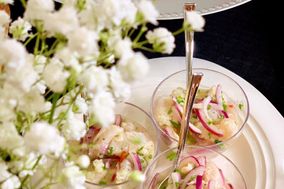 Rosalias’ Kitchen is a family-owned and operated full-service wedding catering service based out of Miramar, Florida. We strive to curate custom menus as interesting as each couple that we cater to. Crafting classic family recipes, we specialize in a wide array of cuisines, preparing dishes to suit... (Wedding Caterers Miami) 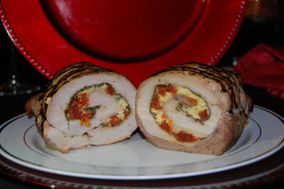 The Dancing Palate is a Miami-based wedding caterer that offers a twist on the old classics. Their goal is to create a one-of-a-kind dining experience by giving classic comfort food a modern, updated twist. The culinary team offers a diverse range of multicultural menu items, so there is something... (Wedding Caterers Miami) 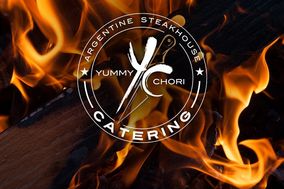 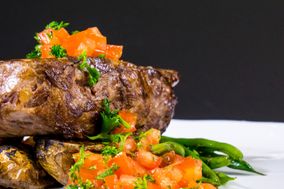 Sidecar Kitchen is a wedding catering company based in Fort Lauderdale, Florida that brings their gourmet meals to your wedding. Co-owner and chef Hector Lopez can work closely with you to go over palate preferences and design a customized menu suited to your tastes. Co-owner Adam Irvin helps to... (Wedding Caterers Miami) 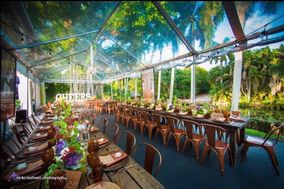 A Alexander Events is a luxury catering and event company located in Deerfield Beach, Florida. With over 25 years of experience, their talented team will guide you every step of the way to ensure your event is one to remember. A Alexander Event LLC seeks to exceed every expectation to bring your... (Wedding Caterers Miami) 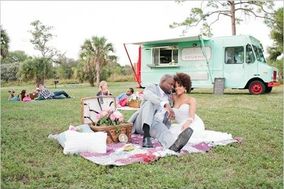 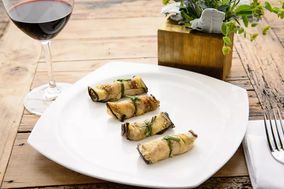 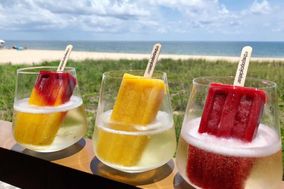 The PopCycle Bar is a wedding dessert catering company based in Fort Lauderdale, Florida. Offering a delicious series of delightful popsicles, this fun-loving team is here to refresh and rejuvenate your guests. With over 40 different flavors and combinations available, these culinary professionals... (Wedding Caterers Miami) 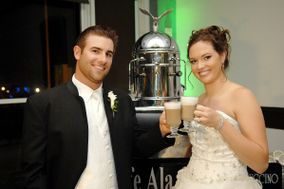 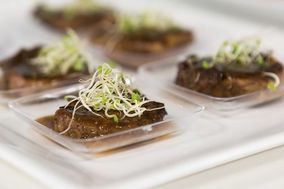 DS Cuisine Catering is a catering and event business in Miami, Florida. We work with couples to custumize their wedding menu.We creates unique flavors and presentation that will wow all of your guests. We also offer Organic food to our clients upon request. Executive Chef Dorothy is extremely... (Wedding Caterers Miami) 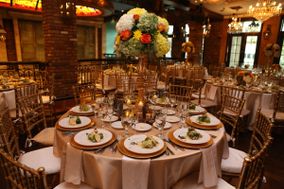 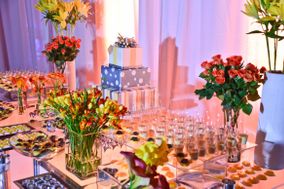 Parties by Pat, Inc. provides catering services to Key Biscayne, Florida and the surrounding Miami area. For over 30 years, the catering company has delivered food to events big and small. Some even include high-profile clients like Barack Obama, Sony Music, Freedom Tower and more. Services Offered... (Wedding Caterers Miami) 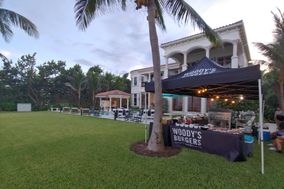 Woody’s Burgers is a wedding catering company based in West Palm Beach, Florida. Owner Woody is a former chef who trained under of the few certified master chefs in the US. He has over 30 years of experience and has worked in large upscale establishments and for catering companies. Since 2009, this... (Wedding Caterers Miami) 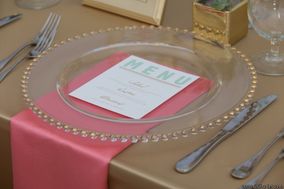 Catering by Mark is a business based out of Fort Lauderdale, Florida, that provides a service to weddings. These culinary specialists delight in creating a memorable experience for all of their clients. Their aim is to eliminate much of the stress involved in crafting a dining experience while... (Wedding Caterers Miami) 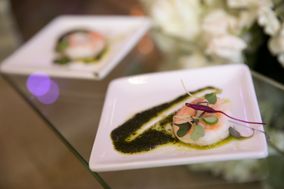 Who’s Cooking Gourmet Catering is a wedding caterer in South Florida. They aim to take a fresh approach in providing delicious menu options for celebrations of varying scales. Their experienced chefs will do their best to deliver a service that both delights and impresses you and your... (Wedding Caterers Miami) 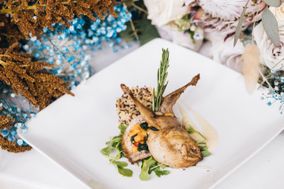 Sensory Delights is a boutique style catering company and your top destination for elegance, quality and premium service for all occasions. From corporate events, to weddings and social gatherings, we work hand in hand with you to make sure that all of your standards are met, and to make every... (Wedding Caterers Miami)

Other Wedding Vendors near Miami

How much does wedding catering cost?

Food and drink are a major part of the wedding experience (no one wants hangry guests!), so it’s no surprise that you’ll spend a big amount of your total budget on your wedding catering. The average wedding catering cost in the U.S. is about $4,000 with most couples spending between $1,800 to $7,000. Note that wedding catering prices do vary widely depending on your wedding’s location and many other factors, like guest count—but no matter where you’re getting married, delicious and plentiful food is essential to an amazing wedding reception experience.

Costs displayed in graph are based on spend from thousands of couples who recently reported pricing for this service within their WeddingWire review. Pricing varies based on factors including, but not limited to, vendor’s experience, level of expertise, event guest count, date, and geographic region.

What is included in a wedding catering package?

What are the different ways to serve wedding reception food?

When determining your wedding food cost, a big factor will be how you’re planning on serving the meal. There are a few serving style options for weddings:

What is the average wedding catering cost per person?

Is a wedding reception buffet always the cheaper option?

Most of the time, a wedding reception buffet is indeed less expensive than a plated dinner. While you’ll pay less in staffing and rentals for a buffet-style meal, you’ll need more food since guests are serving themselves. To keep your buffet budget-friendly, avoid serving costly foods (shrimp, for example) buffet-style or have a staffer on hand to serve your guests from the buffet to keep the portions under control.

What is the average cost of alcohol for a wedding?

Alcohol can comprise a major part of your total wedding catering cost. In general, the average starting price in the U.S. for bar service at a wedding is $15 per person.

Often the first image that comes to mind at the mention of Miami is of a beach. While the city might be known for its golden sands, it likewise features an array of historic buildings built mainly during the early to mid part of the 20th century. This is including a collection of structures from the 1930s constructed in an art deco style. A tropical oasis, you and your sweetheart can exchange vows in elevated locales to casual, outdoor havens.

A trend runs through Miami’s core and it’s the continuous pursuit to find something new and remarkable. In these efforts, innovation is always around the corner and there is an entrenched, energetic vibe that courses through the city both day and night. Given this culture, Miami has developed a reputable food scene that is well known for surprising combinations of ingredients. The many caterers in the city reflect this variety in their own offerings. From traditional dishes to flavorful and fun banquets, you can have the cuisine at your wedding served a number of ways and in varying styles. Keep in mind your wedding theme for your special day when choosing a caterer and also be sure to discuss the style of your nuptials with the chefs, who often can customize a menu for you.

Fort Lauderdale is another coastal city just under forty minutes by car from Miami. Likewise known for beaches and the nightlife, the city is an animated and memorable location for hosting weddings. There are many restaurants and hotels within the city, but given the location relative to Miami, guests can easily stay in either place. Our room block tool can make arranging accommodation as simple as the gentle Floridian breeze through a palm tree. Being close to Miami also gives your guests access to the Miami International Airport, in addition to the Fort Lauderdale-Hollywood airport.

Miami is known for humid summers that are very hot which is thanks to its tropical climate and position on the ocean. These summers are long, in contrast to the shorter and drier winters. Winters tend to be mild and enjoyable. In January, temperatures average at 68 degrees Fahrenheit. This means that weddings can be held outside no matter the month. Given this and the many famous shores, it is no surprise at the popularity of beach weddings, besides a number of other venue options.

Planning for the Sunshine State

$30,800 is the average amount couples spend on their wedding.

Spring is the most popular season for hosting weddings.

Couples on average have 100 guests attend their special day.