There really is family and tradition
surrounding the group,

Sweet Water Junction Band is proud of it’s history. In fact there is so much history to this family band that it can’t be written in one letter. This page will go back to the very start of this band's musical journey.

It all started with David McDowell’s father Porter McDowell. On February 29, 1916 Porter was born in the small community of Patesville Kentucky. Porter was raised with three brothers and two sisters and got his education working in the family coal mine. During the Great Depression at the age of fifteen Porter left home by hopping a freight train (which was common practice during the depression) and joined the CCC in Seattle, Washington. This was one of President Roosevelt's New Deal plans to help people help themselves during the harshest of economic times. After Seattle Porter set out for the Midwest, he worked his way through Chicago, Illinois and in 1936 ended up in Fort Wayne, Indiana. There he called for his family to move up from Kentucky to this “prosperous” industrial city, which they did.

Porter had started playing home grown bluegrass music with his family when he was a child in Kentucky. Those were the days of the front porch gatherings which produced some very awesome talent that still influences our music today. Keep in mind there was no television in those days and only the well off could afford a radio, so a community would gather at a neighbor’s house and entertain themselves. After arriving in Fort Wayne Porter decided to work with a band to make some extra money and that was the start of a legend.

By 1949 Porter was working with bands that opened doors and future possibilities for his son, David, as he started his career in music. Porter along with "Slim" Adams in the MidWestern Trio performed many times on the historical live Chicago radio station WLS, for the National Barn Dance. Porter was also a regular every Saturday morning on Fort Wayne, Indiana’s WOWO live country music program. He played with some of the legendary greats from those days like Roy Rogers, Tex Ritter, Little Jimmy Dickens, Carl Smith, Porter Waggoner, Roy Acuff, and Ferlin Husky to name a few. Porter again with the MidWestern Trio, appeared many times at the historical Buck Lake Ranch in Angola Indiana, and was also a Co- Writer of a song that Tex Ritter had charted in 1951. Also in 1951 Porter who just happened to be in Nashville "in the right place at the right time", was given by Leo Fender of the Fender Corporation, the 3rd Fender Bass off his assembly line for him to try out publicly as a country Bassist. It was a Fender Precision Bass, the 3rd of it's kind. The first being in Leo's Possession with the second one still in the factory. You can see the bass in the picture above with Porter holding it. Interestingly enough, several later years Porter lost that same bass in a poker game!! Being one of the early pioneers of Country Music, Porter's name was in the the Old Country Music Hall of Fame before the fire and subsequent move.
When you would listen to some of the stories that Porter had to share you could hear history in the making. He used to say “We traveled with a five piece band in a 1941 Packard Hearse with my old stand up bass fiddle stuffed in the back”. My, how times have changed.

Porter McDowell is the Grandfather of the
Sweet Water Junction Band.
If you take time to really listen to this
excellent family’s music, you will hear
the product of those seeds that he planted
so many years ago. History is still in the
process of being made...
the beginning of a family tradition
that is still alive today...


Porter's son David McDowell, born June 11.1952, was surrounded by the musical influence of his father as he grew up. In his early twenties, he met the well established Nashville songwriter, Billy Nix. Billy had a group called Billy Nix and the Ideals. Dave became an Ideal playing bass for Billy until mid 1979. This opened up many opportunities to learn the business as he worked in concert, club, and studio environments. It was during the mid 70's when David met and married his present wife, SherryJo. In late 1979 Dave started his own country / southern rock band called “Sweet Water Junction”. This band proved to be a popular, high energy country band in that tri-state area. David played lead guitar, sang bass and shared lead vocals with Sam Moffett Jr, the bass player, and Scott Page, the drummer. His wife, Sherry ran the lights and sound board. The Sweet Water Junction Band has a past career that included working with many other Country artist, some as well known as; Dave Dudley, Del Reeves, Sonny Wright and Peggy Sue Webb, sister of Loretta Lynn. In 1987, Dave, while continuing in music, moved his family from Fort Wayne, Indiana to Sunny Florida where they spent 25 years then later moving on to North Carolina.

Through-out this musical journey and move, David and SherryJo kept busy raising eight beautiful children. Although still interested in music after their move, most of their time was spent in raising the children. With the older children being musically inclined, in 1995 the entire family started off on a faith journey that lasted six and a half years as they traveled throughout the nation. During this time, known widely as The McDowell Family, they were singing and playing their own brand of, mostly original, along with some old favorite, Southern Gospel numbers. They performed in hundreds of churches, festivals, and concert halls through-out the United States. During this time they recorded seven musical projects and influenced the lives of countless people during their musical journey. During those travels they appeared with some well known National Gospel Groups such as; The Hoppers, The McKiethens, John Rowsey with New Journey, The Freemans, Phiefers, The Wisnauts, The Primitive Quartet, Kirk Talley, and countless regional groups. As the children grew & married, they again settled in Florida in 2001, moving on to North Carolina over ten years later.

Today David, with his talented family is still performing on a limited basis. Residing in the border hills of the Carolina's, and accepting bookings across the nation (primarily in the Carolina's, Tennessee, Kentucky, Virginia (WV), Georgia and Florida). They perform some of the best in hot kickin' Country classic and modern with a touch of some good ole Southern and Classic Rock.
David McDowell, the father of eight children, has passed the music down to his family as did his father with him. Sixteen grandchildren and counting the tradition does and will continue to live on... 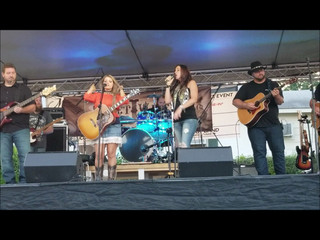