Carolina Music Planner provides wedding music in Asheville, Greenville, Atlanta, Charleston, Savannah, Knoxville, Charlotte, Greensboro, Raleigh, Johnson City, & Highlands. Megan Johnson-Barnes, the founder, has been a part of the wedding industry for over a decade and specializes in string ensembles.

Carolina Music Planner offers a variety of live music options for your special day, and will coordinate the performances from ceremony music to the reception. After planning and performing music for hundreds of weddings, Megan Johnson-Barnes has streamlined the booking process to simplify it for the client from start to finish.

With diverse options from a classical string quartet to Appalachia/folk duos, CMP has an ensemble for every client.

Services Offered
Carolina Music Planner offers high-quality service options to each couple. Organized, concise packages make the process of finding the right fit for your wedding easy. In the end you will receive top-notch service and a stunning performance. Some of the services available include: 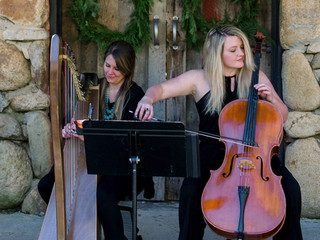 Megan began playing the cello as a young child in Atlanta, GA. After moving to the SC low-country in 2004, she studied with Damian Kremer and Natalia Khoma in Charleston, SC. Through her high school studies, she was an active part of the Beaufort, SC classical music scene, regularly performing with the Beaufort Chamber Orchestra. She was principal cellist of the Beaufort Youth Orchestra through grade school, eventually teaching cello students in the area. She began performing for weddings/special events over 10 years ago, and has since played/organized hundreds of events. She attended the University of North Carolina in Greensboro as a Cello Performance Major, then finished her studies with Natalia Khoma at the College of Charleston, completing her Bachelor’s degree in Cello Performance.

Megan has been honored to share the stage with Yo-Yo Ma, Andres Cardenes, Bela Fleck, the Trans-Siberian Orchestra, William Preucil, and many other world-renowned musicians. She attended the advanced division of Brevard Music Festival. Currently living in Asheville, NC, she enjoys performing with the Johnson City Symphony, STACE, and her regular string trio consisting of harp, violin, and cello. She will be sure that your wedding/special event music is performed at the highest level of professionalism, only hiring the most talented musicians in the region.

In her free time, she enjoys spending time with her daughter and husband, Tate.

She chooses to donate to Helpmate to support domestic violence awareness. She believes in healthy, happy love (whatever that looks like for you). Carolina Music Planner supports LGBTQ clients with open arms.

Teresa earned her Bachelors degree in violin performance from Converse College where she was concert master. During her college days she was selected to play the Spoleto Festival in Italy with Sweelinck Conservatory of Amsterdam. She also spent summers studying at Brevard Music Center in Brevard N.C.

During her free time,Teresa enjoys drawing her whimsical art, playing piano, volunteering at animal rescues, and spending time with her 2 dogs.

Rachael began her violin studies at the age of two. She made her professional debut with the Charlotte Symphony Orchestra at the age of 16, and continued her violin studies at the Cleveland Institute of Music. Rachael has held positions with the Asheville, Greenville, Charleston, and West Virginia symphonies, and most recently served as Performing and Visual Arts Coordinator at Chautauqua Institution, a nine-week summer festival in Western New York. During her time at Chautauqua Institution, she oversaw all of the institution's arts education and community engagement initiatives, including in-school residencies for students with disabilities made possible through grant funding from the John F. Kennedy Center for the Performing Arts.

In addition to the standard classical repertoire, Rachael is deeply
committed to exploring musical diversity and the broader scope of the fine arts spectrum. Her work has been lauded for its diverse programming, thought-provoking subject matter and mission of social change through the power of music. Rachael lives in Morganton with her husband, and maintains an active Music Together® teaching schedule and private studio for gifted students. Haiku I Do Banquet Halls