Tesoro is a violin-guitar jazz duo specializing in French and vintage jazz of the 1920’s-1940’s. Tesoro plays for weddings, cocktail parties, receptions, corporate, and private events as well as themed events such as French and Gatsby-era.

Tesoro is based in Charleston, SC and has also played throughout the southeast United States, including Savannah, GA; Tampa, FL; Raleigh/Durham/Chapel Hill, NC; Outer banks of the Carolinas.

The members of the duo are Gina Guidarelli, violin and Billy Kaiser, guitar. They have appeared on radio shows and television segments, Piccolo Spoleto music festival, Italian music festivals, and on-stage performances.

Billy Kaiser has a degree in broadcasting and is often asked to act mc for the weddings they play. They come prepared with their own sound system and microphone. 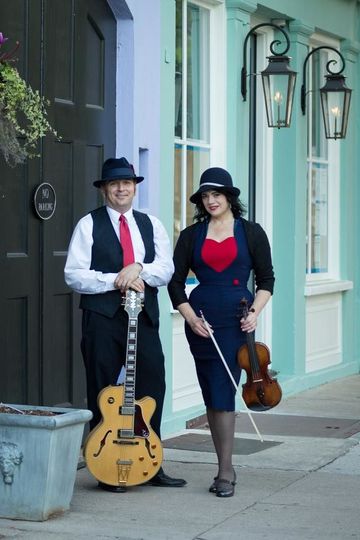