The Edge Hotel is an exquisite waterfront-wedding venue located in heart of Clearwater Beach, Florida. Exchange your vows against the beautiful backdrop of the Gulf of Mexico for a truly memorable wedding day. Wedding planners will assist in organizing the details of the event so you can enjoy this special day. Lodging and culinary delights are additional features of the Edge Hotel.

Facilities and Capacity
Host a wedding event in one of the many venue spaces of the Edge Hotel. An exceptional and memorable outdoor space is The Water’s Edge Deck, which floats directly on the Gulf of Mexico. This space offers 2,500 square feet for your wedding celebration and a view of the stunning water and city of Clearwater. The Water’s Edge Ballroom is an indoor space that can accommodate up to 140 people or be separated into three different event spaces. This 1,700-square-foot area of the Edge Hotel also offers views of the Gulf of Mexico, Clearwater Beach and Clearwater Harbor. To take advantage of the gorgeous surroundings, step out onto the adjoining covered veranda for additional space. The Water’s Edge Pre-Function area features striking views and 950 square feet, which can host up to 80 people.

Services Offered
Customize your engagement party, bridal shower, elopement, rehearsal dinner, ceremony or reception at the Edge Hotel. Collaborate with wedding planners as you organize the wedding of your dreams. Couples and guests who wish to lodge at the wedding event venue will appreciate the accommodations of the Edge Hotel. Other services provided by this venue include the following:

Cuisine
The skilled chefs and culinary staff of this venue prepare cuisine that is both fresh and indicative of the Edge Hotel’s coastal location. A buffet, plated or course-style dining experience is available through this venue’s culinary service. The banquet staff extends expertise to help ensure a relaxing dining experience. Necessary service items of barware, china, flatware, glassware and linens are provided by this venue. 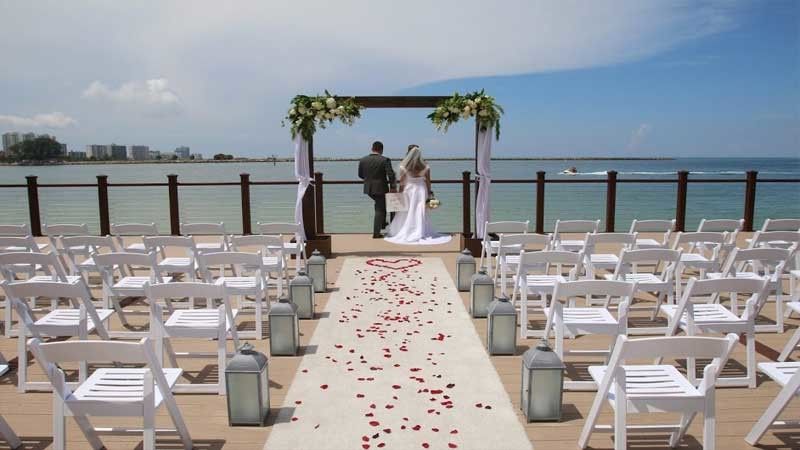 Recommended by 80% of couples