I'm sure some of you have seen this "knot tying" ceremony idea on here or Pinterest or whatever.. but anyway, FH and I fell in love with the idea! We've been to a lot of weddings together and wanted to do something symbolic during the ceremony, but did not want to do the sand or the candle unity ceremonies, since we wanted something a little bit different!

BUT we had a hard time finding a "script" of sorts for the officiant to incorporate it nicely into the ceremony. Now, we aren't having a particularly formal wedding and we're pretty laid back, which is why I think this cute little anecdote works in the beginning!:

BRIAN and JILLIAN have chosen to “tie the knot” to symbolize their union.

The story goes, that around the turn of the nineteenth century, an art form arose from the ranks of deep-water sailors. That art form was “knotting”. Sailors used rope to create knots that were anywhere from simple to elaborate. Some knots were purely for use, some only for decoration... 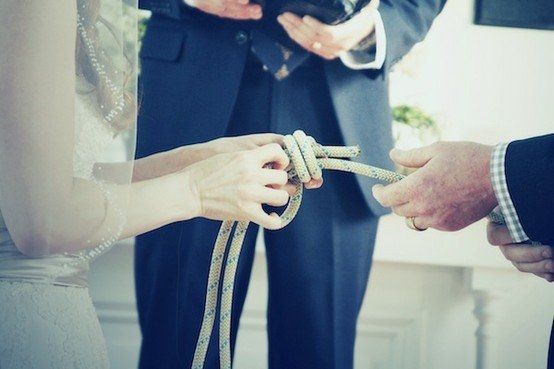