ARE YOU A VENDOR?
Mrs. Carmen

*slaps down sticker* You've been snarked. 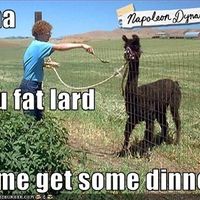 Seriously.. everything you touch is magical. Just saying.. xoxoxox

I can't post the link from here because I'm at work (bleh) BUT this had me laughing so hard I was crying Go to You Tube & search "Kitty is a very BAD mystic" too funny Also check our "Sexy Sax Man" or...

I uploaded a photo in Chesty LaRue's discussion

1665 days ago
3 pt
Petition to keep WW posts off of FB fan page. Sign here and flood the first page with petition posts

Hey mods we are the REAL community and do not like the current practice of using posts on the fan page. FB is a MUCH larger audience and what is said here should stay here. Yes this site is public however is not as widespread as FB. To the brides of...

I uploaded a photo in Mrs. Williams's discussion

make love? FH wants to do it every day! So if one day he doesn't come onto me and I don't come onto him, he thinks I'm unattracted to him and not interested in him in that way. I think he only does this as a test to see if I will approach him. I love...

I uploaded a photo in Rabbit's discussion

1665 days ago
3 pt
can someone help me find the designer of this dress?

I have been looking at DHgate.com (don't plan on ordering from them, just looking cuz I wanna look) and I found this dress, that looks similar to my "dream" dress, (which is WAY out of my price range)here's my dream dress-...

61 messages · Reply
View all activity
WeddingWire celebrates love ...and so does everyone on our site! Learn more