Skip to main content
ARE YOU A VENDOR?
dragonfly726

Ladies on a budget, if you had to cut back what's more important the reception or the honeymoon? Those are the areas where most of the money is spent. Just curious. My honeymoon is a little more...

Had very cute decor thanks to my wonderful sister and MOH, @Dragonfly726 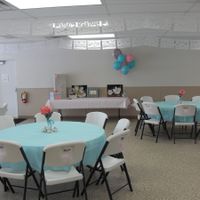 To plan a wedding from scratch in 8 weeks? When you don't even have an engagement and are planning on a traditional wedding? I have a good friend from college who just informed me that she and her BF...

We want to know how you made your wedding uniquely yours! Come share your perfectly personalized elements in our HowWeWed contest for a chance to win $1000: https://www.weddingwire.com/wedding-forums/howwewed-share-how-you-personalized-your-wedding-to-win/91084e722f020793.html

I earned a badge!

Hot streak! You can't get enough of the WeddingWire community, can you? Thanks for being a loyal community member and visiting us 5 days in a row.

I uploaded a photo in dragonfly726's discussion

I'm trying to decide which shoes to get for my sissy's wedding. She's wanting the bridesmaids in pewter shoes. I have it narrowed down to 2. I feel like I would wear #1 more often, but they are almost twice as expensive as #2, and about $15 more than...

36 messages · Reply
View all activity
WeddingWire celebrates love ...and so does everyone on our site! Learn more