"A Hindu wedding is Vivaha and the wedding ceremony is called Vivaah Sanskar in North India and Kalyanam in South India. Hindus attach a great deal of importance to marriages. The ceremonies are very colorful, and celebrations may extend for several days."

In Hindu culture, marriage is one of the most important sanskaras or rites of passage that a Hindu observes during his or her lifetime. Briefly stated, the marriage or the Vivaah Sanskar is the transition from the first stage of life, devoted to education and learning, to the second stage of life, devoted to building a household and raising children. The married couple pursues Dharma , performing the righteous duty, Artha , the acquisition of wealth and Kama , the enjoyment of natural desires. They lead a productive life of work, service and enjoyment, fulfilling various duties and obligations towards themselves, their families and society at large. In Hindu scripture, marriage is a sacrament with strong moral and ethical values. It is meant to unite the bride and the groom firmly so that they essentially become one in soul and spirit.

The Hindu marriage ceremony is primarily based on the marriage of Surya, the daughter of Savita (The Sun) to Ashwinikumar, as described in the Rig-Veda, one of the oldest Hindu scriptures. After Ashwinikumar wins the chariot race, Savita gives away the bride in a splendid ceremony. It is written in Sanskrit, one of the oldest language in the world.

Think of the actual wedding ceremony as if it were a romantic story, where the bride and the groom come to the Mandap, separately, as if unknown to each other. Then they fall in love and ask the parents' permission to get married. We explain them what the Hindu marriage means and they accept the obligations that go with it. During the various rituals, the couple commits to remain faithful to each other and repeat the pledge in front of the Fire God, the Agni and all the witnesses. Then, they walk four(every Hindu wedding has at least four pheras. These pheras signify the four main aims of life: Dharma, Artha, Kama and Moksha) or seven (In an Arya Samaji wedding, the couple take seven pheras. The groom leads for the first four pheras. After this, he walks behind the bride, who leads the last three pheras, thus signifying that the wife will always lead the husband) steps together committing to seven marriage vows to each other , about their future life together. We all bless them and wish them a very happy life and they leave the Mandap as a newly married couple!

It takes you thru the logical steps of first meeting of the bride and the groom, their decision to get married, bride's parents giving away the bride, the couple committing to marriage in front of the sacred fire, bride's transition to her in-law's home, the couple taking the seven vows and the friends and families blessing the newly wedded couple.

Following are the essential steps of the ceremony. They will be customized to each specific wedding and the overall program will be distributed at the ceremony.

Swagatam/Welcome ceremony - Welcoming Groom & his family The Barat, the singing and dancing procession of the groom and his family, reaches the wedding venue. The bride's family welcomes them with Aarti and sweets, as a symbol of happiness and good tidings to come and escort them to the wedding hall.

Shree Ganesh Prayers & Poonyahvachanam After all are seated, we start the ceremony with prayers to Lord Ganesh to bless this occasion and make the marriage ceremony free of obstacles. We solicit the blessings of elders and our forefathers, and pray for this to be an auspicious day for the marriage ceremony.

Vadhu Aagman - Arrival of the Bride Bride is brought to the mandap typically by her maternal uncle, along with bridesmaids, and grooms'men. An antarpat, an auspicious cloth, separates Bride and Groom as a symbol of their separate existence prior to the marriage.

Mangalashtakam & Sankalpa - Mutual Approval After the Mangalmantras are recited, Bride and Groom garland each other, indicating their mutual approval to proceed with the ceremony. The Pandit explains them the objectives of the Vivaah Samskar and then they propose to marry each other and enter the Grahasthashrama as a married couple.

Kannyadaan - Giving Away the Bride In the Brahma Vivaah, the highest form of Hindu marriage, Bride's parents, "give away" the Bride as one of the noblest acts they will perform in their lifetime. Bride and Groom then commit to remain faithful to each other, while pursuing Dharma, Artha and Kama. Bride's mother pours holy water on bride's father's palms, which flows into Groom's and then into Bride's palms, symbolizing the continuity of life, repaying the debt to their forefathers and the passing of the family heritage to the next generation.

Akshatropanam & Panigrahanam (Hastmelap) - Expectations from Married Life The Bride and the Groom communicate their expectations of married life and show their consent by showering rice on each other. Bride requests his support for a healthy and prosperous family life. Groom requests her support in pursuing Dharma and for her cooperation in his various endeavors for a successful life. They accept each other's hands with blessings of Heavenly Gods with a promise to stay together for the rest of their lives, symbolically tying each other's wrists with sacred thread which is called Sutrabandhanam.

Mangalsutrabandhanam - Marriage Commitment to Each Other Groom adorns Bride's neck with the Mangalsutra, a necklace symbolizing good luck, love and friendship. Groom applies kumkum on Bride's forehead, now as a Soubhagyavati. Bride applies chandan tilak on Groom's forehead, now as a Grahastha. With the wedding ring exchange, they commit to support each other, in good times and bad times, in happiness and sorrow, with unending love. They are joined together in a marriage knot by the Groom's sister or mother, as a symbol of their permanent bond

Vivaah Homa - Worshiping the Sacred Fire Vivaah Homam is the start of the Grahasthashrama for the couple. The couple lights the Agni, the holy fire that symbolizes light, power and knowledge, and acts as a witness to the ceremony. Bride and Groom repeat the sacred pledge of marriage and request Agni to be the messenger for their prayers to various Gods, for Santati (children), Sampatti (wealth & prosperity) and Deergharogya (long & healthy lives).

Laja Homa & Agni Pradakshina - Starting the Marriage Journey They circle the sacred fire four times, starting their transition into married life, supported by Bride's brother, as her lifelong supporter. As they circle the fire, Groom poetically describes to Bride their complementary relationship. I am the sky, you are the earth. I am the thought, you are the speech. I am the fire and you are the fuel. I am the song, you are the verse;I am the ocean, you are the shore. I am the strength but you are the beauty. I am the Purush, and you are my Prakriti. Let us live together lovingly & bring up our progeny. Let us lead a joyful life of a hundred years. Please ascend this stone and be as firm throughout our married life. After the Agni Pradakshina, the Bride moves to the left side of the Groom; indicating her transition to the Groom's family.

Ashirvad - Blessings We all offer our blessings to the couple for long and happy lives together. After being declared as Husband and Wife, Groom and Bride bow to all invited guests and leave the mandap as a newly married couple as the guests shower them with flower petals. 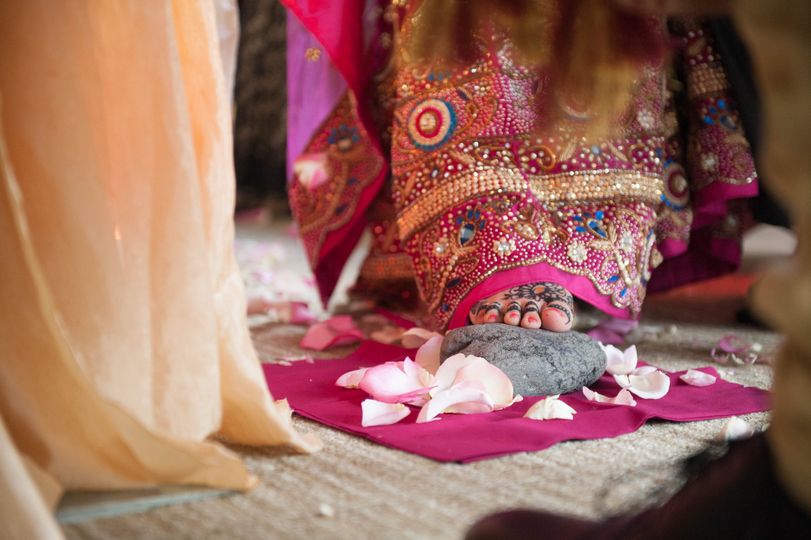 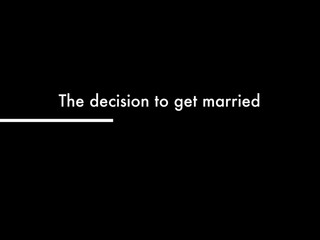