We specialize in providing THE LIVE SOUNDTRACK for your wedding from the time your guests arrive to the time they leave!

The professional musicians of Columbus Musicians, LLC are dedicated to ensuring that the musical foundation of your event is nothing short of perfection. No gaffes allowed. But "perfect" never means dull. From musical selection through preparation to performance, we promise that the experience will be fun and the result everything you were hoping for.

Our musicians are some of the most talented professionals in the Columbus area, based on your choices of repertoire. We have string quartets, trios, duos, harp, piano, guitar, brass, jazz ensembles, guitar and vocals as well as bands. We're able to provide instrumentation to your liking, as well as music of virtually any genre from traditional classical to modern rock.

Inquire to find out more about how we can create the "WOW" factor with live wedding music for you and your guests! 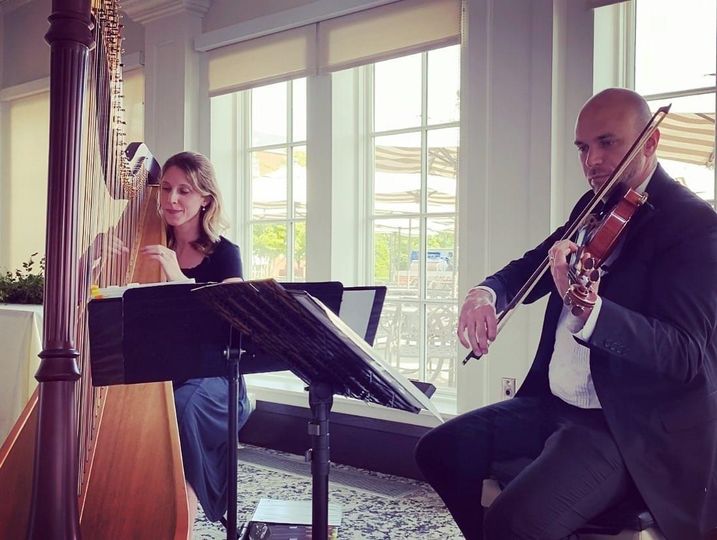 Write a review
4.9 out of 5.0
76 Columbus Musicians,LLC Reviews
Sort by:
See more reviews

Tiffany began studying the harp at age 11. She studied through college, and has over 20 years of playing the harp professionally full time.

She has played for many different events from orchestras to operas and musicals to small chamber groups, accompanying choirs, and playing solo. Tiffany has played for over 450 weddings! She also plays weekly at The James Cancer Hospital.

She moved to Columbus, OH in 2012 from Chattanooga, TN, where she held a busy performing schedule, had up to 17 harp students, and was the Director of the Chattanooga Harp Ensemble.

Tiffany formerly held the position of Personnel Manager and Librarian for the McConnell Arts Center Chamber Orchestra in Worthington. She has also served as an adjudicator for the piano and harp division for the Columbus Symphony Youth Orchestra Young Artist's competition.

Tiffany was a single mother of 6 children for 5 years, but in 2019 got married to violinist Ian Jones, owner of Columbus Musicians, LLC (the top provider of string ensembles for Columbus weddings)! Starting in 2021 Tiffany became the General Manager and Personnel Manager for Columbus Musicians, LLC. Ian and Tiffany were top competitors for live wedding music in Columbus (friendly competitors, of course!), and are now the most dynamic duo combining years of performing as well as experience running a wedding business. Ian and Tiffany live in Westerville, OH with their 8 children.

Ian has been a violinist for almost 30 years, his undergraduate degree is a Bachelor of Music in Violin Performance, and he has been performing in weddings for about 25 years. His primary focus throughout his career has been on chamber music - small groups like the ones he performs with in weddings.

Both TIffany and I have very high standards; not only for ourselves, but for the musicians that work for us. We try to make your wedding music the easiest and least stressful part of your wedding planning. We have a very broad and detailed knowledge of the repertoire for both traditional weddings and for those who love our Rock/Pop repertoire.