C. Stelle Music is a "Central Pennsylvania’s Premier Arts Management Group" located in Harrisburg, Pennsylvania. They are dedicated to providing lovely melodies for your event, be it from a string quartet during your ceremony or a jazz pianist during the cocktail hour.

Caleb, the owner of C. Stelle Music, is a tenured orchestra teacher and talented violinist, vocalist, and pit conductor. He has a vast list of accomplishments that includes many appearances in orchestras and choruses as well as a TV appearance in 2019. Caleb also has also been involved in directing musical shows in many venues in the local area.

C. Stelle Music believes that every event and couple is distinct and that the musical ambiance should match their needs as the situation demands. A consultation can be scheduled to discuss your particular circumstances and desires for your wedding event. 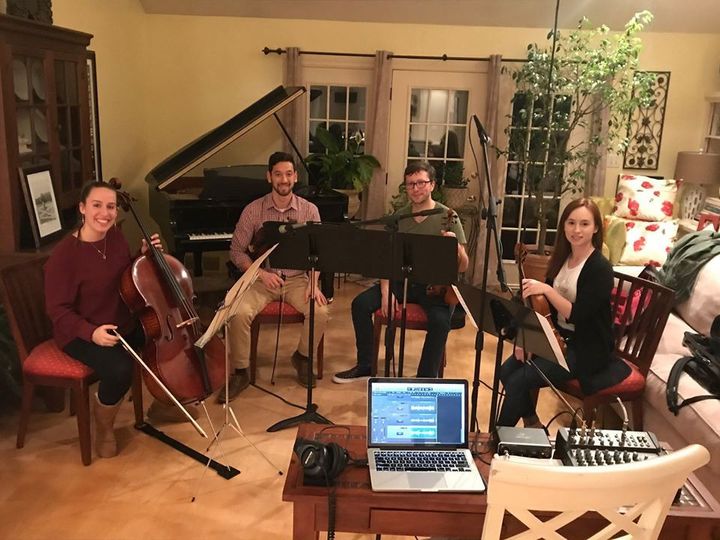 A tenured orchestra teacher at Central Dauphin SD, Caleb has taught many young people, some who have been selected to perform at the PA School Board Association’s State Conference. Additionally, he has served as a Violin Masterclass Instructor and Chamber Strings Coach for Messiah College’s Orchestra Camp, as well as an Artist in Resident for Jump Street/PA Council on the Arts. As a performer, Caleb studies violin under Peter Sirotin, concertmaster for the Harrisburg Symphony, and has performed with the York Symphony, Totem Pole Playhouse, Allenberry Playhouse, Open Stage of Harrisburg, Theatre Harrisburg, Susquehanna Stage Company, Bare Bones Theatre Ensemble, the Central PA Womyn’s Chorus, the Harrisburg Gay Men’s Chorus, Harrisburg Harp Orchestra, the Central PA Symphony, and the University-Community Orchestra at Shippensburg University. He studies jazz improvisation under Grammy nominated pianist Kirk Reese and has collaborated with local bands, Great Northeast, Rascal Revival, and Seasons.

In January 2019, his playing was featured in the Lifetime Channel reality wedding show, "Married at First Sight."

As a vocal soloist, Caleb has performed in concert with the composers Paul Caldwell and Sean Ivory, the Harrisburg Symphony Young Person’s Concerts (Bizet’s Toreador), the Hershey Symphony’s Beatles Tribute Concert, and the Harrisburg Harp Orchestra’s “A Harp-Felt Christmas”. He has given lectures at both Messiah College and PMEA events. Additionally, he has music directed shows at Allenberry Playhouse, Theatre Harrisburg, and Hershey Area Playhouse. In his “spare time” he runs C. Stelle Music (cstellemusic.com), a musician contracting business, that provides a plethora of music groups for weddings, political events, and parties throughout Central Pennsylvania. Caleb holds a Master of Music in Orchestral Conducting from Messiah College.

Making her home in Central Pennsylvania, Mary-Kate Spring Lee is an award-winning harpist with over 20 years of experience. She performs often both as a soloist and with her acclaimed Celtic Nu-Folk Band, Seasons.

Mary-Kate has won the Mid-Atlantic Fleadh twice on Celtic Harp, as well as placing 3rd in the Senior vocal competition. She has also competed twice in Ireland at the All-Ireland Fleadh. Mary-Kate is also a multiple-time recipient of the Knot’s “Best of Weddings” Awards, The Knot Hall of Fame, and Wedding Wire’s “Brides’ Choice” award.

Mary-Kate has performed at a wide variety of venues, including the Pennsylvania Renaissance Faire as “Harper Lee” The PA State Capitol Rotunda, The McLean Celtic Festival, The National Apple Harvest Festival, The Bethlehem Music Festival, The Rose and Shamrock Festival, The Kutztown Folk Festival, Historic Acres in Hershey, and many more.

Sarah Seibert is a 2016 graduate of Messiah College with a B.S. in Music Education. During her undergraduate studies, Sarah received private lessons from Fiona Thompson (principal, Harrisburg Symphony Orchestra) and Dr. Diana Curtis (D.M.A. in Cello Performance from The Catholic University of America). Sarah also performed with the Messiah College Symphony Orchestra, sitting principal her senior year. Since high school, Sarah has gained experience playing for weddings and private events in quartets and other varying small ensembles.