What do do when your bridesmaid dresses are awful

Kelsi, on February 25, 2021 at 12:32 PM Posted in Wedding Attire 0 20
Saved Save
Reply
When I went bridesmaid dress shopping back in December, I had my heart set on the sangria color from David’s Bridal. However, David’s Bridal is discontinuing the color, and didn’t bother to tell me that until 3 hours later, after all 4 of my bridesmaids chose dress styles they loved, and only one of them was available in Sangria (thanks a lot BD).
Instead of making 3 of my girls spend another 3 hours finding dresses the likes in the limited Sangria stock, I switched my color to plum. It was originally one of my accent colors, and I didn’t hate it.
But then my bridesmaid sent me this picture. I am a graphic designer by trade, so I understand that lighting and camera presets can drastically alter the color. But I really hate the way the dress looks. So I took another look at my swatch, and I actually really don’t like it. I’m getting married in June, and DB’s plum dresses are just too dark, and not even a pretty purple shade. All 4 girls have received their dresses and started alterations, so it’s way too late to change what they’re wearing. I haven’t seen any of the dresses in person, but I don’t like the swatch, and I don’t like the picture, so I’m really worried I’m going to hate the dresses as well. I’m having major dress regret. Help? 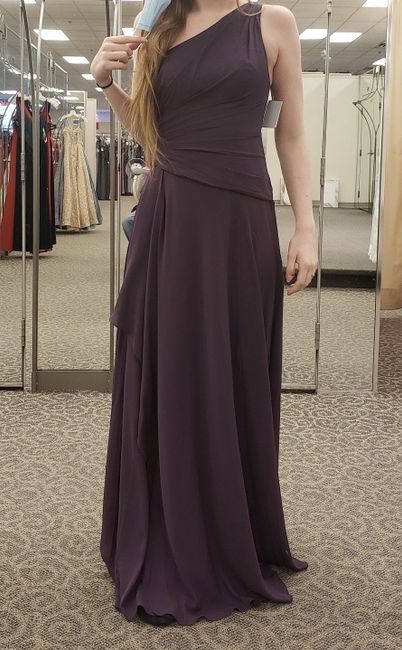