ARE YOU A VENDOR?
Expert October 2020

Stand-in alternatives — tacky or not?

Kimberly, on August 6, 2020 at 10:43 AM Posted in Community Conversations 0 15
Saved Save
Reply
1 of my 2 bridesmaids won’t be able to come to my wedding. She lives in the Philippines and we had been keeping an eye on the world news and health situation for months and hoped things would improve but it has not. She and her family will still be able to watch the wedding via livestream, so at least there is that small success.


Anyway, on to the main topic of this post. My mom has the idea of maybe my MOH could carry an iPad with this bridesmaid FaceTiming so she could still be part of the ceremony. My concern with this is the camera angle and audio quality she will see and hear will be awful, and while I’ve seen this done it would be better for her and her family to view the professional livestream channel (multiple camera angles, the works)
My fiancé had the idea of doing a custom life size cutout of her so she could “be there” without physically being there. Again, I’ve seen this done but personally have found cutouts of people’s heads and bodies unsettling. Also what do you do with it afterwards? Send it to her? Throw it away? Idk about this one either.
I had the idea of doing something similar by screen printing her photo on a shirt of a teddy bear (like the photo below) and have someone carry it down the aisle and sit it on a chair where she would have been during the ceremony. We could take pictures with it and send it to her in the care package I’m sending anyway with her bridesmaid goodies.
Do any/all of these seem tacky? If anyone has other suggestions I am open to ideas. 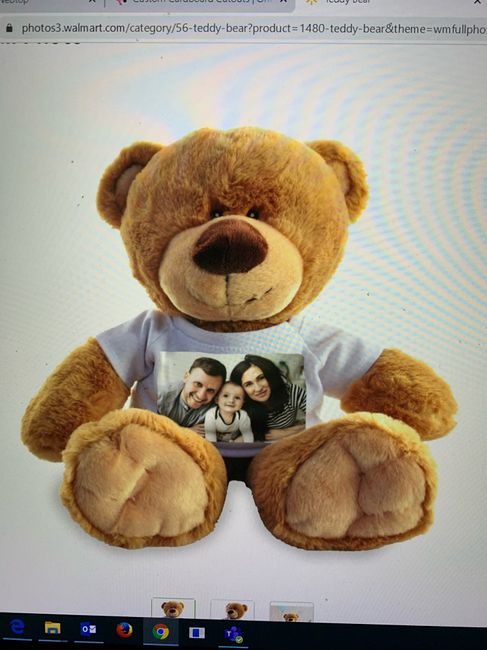