Oh my God I'm so bored

There's no one at work today. Just Caitlin. I wanna go hooooome. 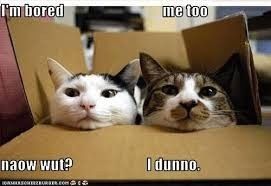