Queen’s Entertainment LLC provides the appropriate melodies for weddings and other special events throughout District Heights, Maryland, and beyond. Tomika Arnold is a professional vocalist who specializes in gospel, R&B, soul, jazz, and opera singing. She loves to add extra emotion and poignant throughout couples’ weddings with her calming and pitch-perfect voice.

Tomika has years of experience to her name. In the past, she has had the honor of working with many well-known artists including Micheal Jackson, Sting, Beyonce, and Bruce Springsteen at Super Bowl XLII. What’s more, she has proudly sung the national anthem for three former US presidents including Bill Clinton, George W. Bush, and at Barack Obama’s inauguration. Her talents have enabled her to tour the world and provide stunning vocals for an array of special moments.

Queen’s Entertainment offers a variety of packages to best suit your specific requirements. Their full collection includes two singers, a pianist, and a saxophone player for your entire day. They can accompany you down the aisle and play up to four songs at your reception. A classic four-piece band or DJ can also be arranged for your reception if desired. All songs performed can be chosen by you and performed in the style your want. 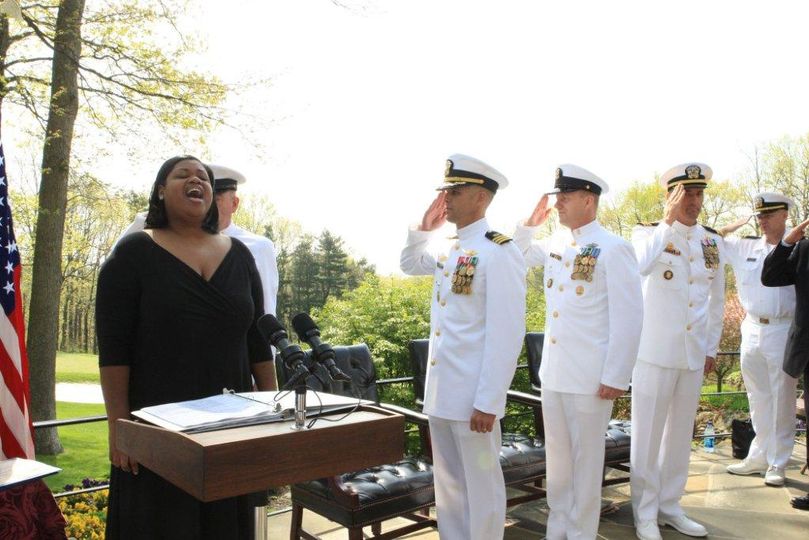 Tomika Arnold is a Christian/R&B/Gospel/Jazz/Classical/Songwriter/Singer/Author and owner of Queen’s Entertainment, LLC. Native to Washington, D.C., she comes from a family of singers, including Atlanta vocalist Monica, who debuted in 1995 with two platinum top ten singles.

A gifted vocalist, Tomika has been singing since the age of 11 when she and a small ensemble of teenagers were selected to sing with the Eastern High School Choir. The choir later represented the United States in a worldwide competition for UNICEF, held in the Netherlands. Tomika was later trained by the award winning Joyce Garrett, Founder and Artistic Director of the ‘Excellence without Excuses Program’. She has been vocally trained by Soprano, Joyce Lundy at the Levine School of Music, one of the largest and most prestigious music schools in the nation; and accredited by the National Association of Schools of Music, the only all-Steinway community music school in the world. Her natural talent and training give her the range to sing sacred, secular, and classical music, and her portfolio includes spirituals, inspirational, gospel, jazz, pop, and blues.

Some of Tomika’s most memorable accomplishments include working with her local church, The Soul Factory on their “Remanufactured Soul I & II” projects, where they remanufactured soulful R&B hits to bring glory to God; singing background for “The Boss” (Bruce Springsteen) at Super Bowl XLIII, and working with Bon Jovi on his 2009 CD release, “Keep the Faith”. Her vocal talents have taken her across the world, having toured internationally to Switzerland, Holland, South Africa, and more than 30 cities in Italy to sing the good news in the form of gospel music. In 2018, her heart of service birthed "In The Streets Ministries” where she donates toiletries to the homeless.

Tomika also enjoys songwriting, having written many songs that capture the essence of life, with lyrics that transcend gender, race, and age. She is a member of the Songwriter’s Guild of America and is well known in the Washington, DC area, having written music and lyrics for local artists. Her music educates, inspires and displays wisdom far beyond her years. Her sound is unique, melodic, and controlled and her voice is soulful, sultry, and soothing, yet bold. The earth grumbles and moans to hear her sing. This mother of one is most honored when she is leading worship at her church Victory Christian Ministries International in Suitland, MD.