From the rugged highlands to the more refined offerings of its cities, a Scottish honeymoon will be a bonny honeymoon!

With its cities, charming rural towns, rolling landscapes, and soaring highlands, Scotland offers something for a variety of honeymooners on every budget.  Those looking for luxury will find it, as will adventurous travelers looking for remote treks. History buffs will revel in Scotland’s long and fascinating past and its historic sites, and those seeking a more conventional quiet tour will be satisfied, as well.  Needless to say, whisky aficionados will be in paradise! Most travelers are going to arrive into the well-served airports at Edinburgh or Glasgow and then be able by bus, train, air, or rental car be able to go wherever takes their fancy.

Scotland can be divided into three regions: the Northwest featuring the Highlands and the islands, the Central/South with the Lowlands and the Borders, and the Northeast with flatlands and the region of Loch Ness.  Those looking for the rugged will be best served going to the Northwest out of Glasgow. Those looking for the creature comforts of the cities or an easy tour of the countryside will enjoy the Central/South, particularly Edinburgh, Glasgow, St Andrews, and Stirling.  The Northeast is home to the wild Cairngorm park, spectacular castles, the Orkney and Shetland island, and Loch Ness!

Ready to plan your Scotland honeymoon? Get the inside scoop with this guide. 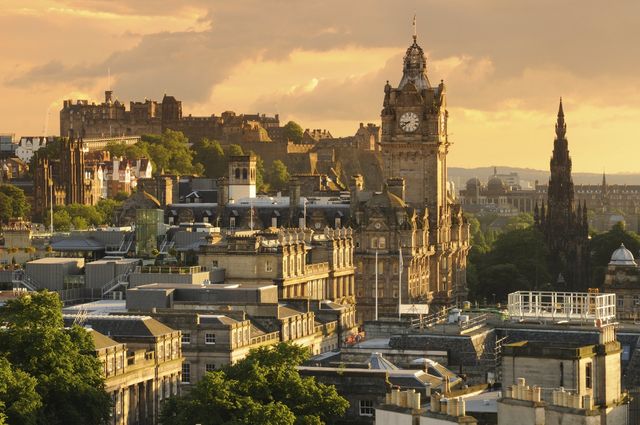 Most will like the summers, where the pleasant days will often be 65-75 degrees.  Given its northern latitude, the sun will still be shining until nearly 11 pm! The spring and autumn seasons are less popular, but markedly less busy.  Winters can be harsh due to the cold and the high winds characteristic of Scotland, though Hogmanay (New Year’s Eve) is Scotland’s largest party. Airfares and hotels will reflect these prices, with peak prices from late May to mid-September in addition to Christmas-New Year.