About The Copper Piano - Dueling Pianos

Based in Winter Garden, Florida, The Copper Piano is a dueling piano entertainment group available to book for weddings and more. Composed of talented musicians with a sense of humor, this unique band is happy to offer unforgettable performances. When on stage, two musical artists from The Copper Piano play a communicative rendition of sing-alongs, dancing tunes, and much more.

This company has been on stage for many different types of venues and occasions. From large-scale arenas to seafaring cruise ships, their crew can set up almost anywhere. Everything from original tracks to well-known favorites is available, providing exceptional performance versatility. For an event full of energy, fun, and laughter, this company is ready to present their best for a couple’s wedding celebration. 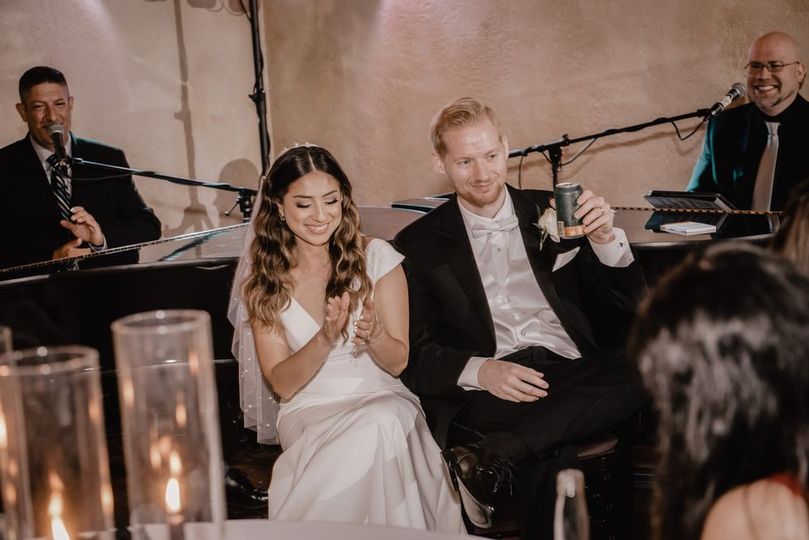 Jason began his piano lessons at the age of five. While growing up in the suburbs of Seattle, he continued pursuing his love of music by playing bass in his high school's Jazz Band and singing in Jazz Choir. Jason has been a resident of Orlando for nearly 20 years, and began his Dueling Piano career in 2009. He has performed all over Florida as well as internationally. After being mentored by the best in the business, he decided to branch out on his own and in 2020, created The Copper Piano.

At the age of seven, when playing his first notes on the piano, Harry quickly learned that he wanted to be a pianist performing in the styles of Jazz and Latin music. Growing up in New Orleans, he was exposed to a wide array of jazz forms ranging from Ragtime to bebop, ballads and fast swing. His Puerto Rican heritage influenced him to blend the styles of salsa and jazz into Latin jazz. Since 2006, Obtaining a BA in music performance from Stetson University, Harry implemented the techniques and technical proficiency he learned into his performances to wow audiences from around the world. With his arranging, teaching and performing, Harry maintained an active schedule collaborating with musicians throughout Central Florida and has served as a Musical Director, arranger, composer and performer for corporate events, universities and Cruise Lines. Most recently Harry joined Royal Caribbean Cruises in Europe, Canada, Alaska and Southeast Asia as a resident Guest Entertainer, Lounge Pianist and Vocalist playing 6 days a week for months on end non stop and arranged/produced his first Headliner act with a full band behind him where he honed his skills for audience engagement, charming them with his smile and high energy. Still growing, learning and with loads of experience at a young age, Harry has played for international audiences and has developed 100’s of engaging shows at the piano bar of classic tunes for all to enjoy.

Tyler Robinson brings 10 years of professional experience to the table. Originally from Illinois, he has called Florida home for 7 years. Having played various venues around the country, including bars, restaurants, retirement homes, private parties, grocery stores, theme parks and resorts, he brings a wide variety of music, and entertainment value to any event! From the 40s to now, he will try almost anything!