The quaint Dutch Caribbean island, just off the coast of Venezuela offers something for everyone, whether you are looking for a vibrant nightlife, lounging on one of the world’s top 10 beaches, delicious international cuisine or the thought of 365 days of sunshine during your Aruba honeymoon.

For couples who don’t want to stray too far from the East Coast but crave the warm, romantic luster of the sea, Aruba is dreamy option. This small Dutch-Caribbean gem is off the coast of Venezuela and offers everything from pristine beaches to hiking trails and even historical ruins. It’s most well-known for their divi-divi trees that have a natural slope to them, thanks to trade winds, and for the touches of Europe that are found throughout the nation. You’ll hear Dutch, Spanish, English—and a dialect that’s a mix of all three, as well as the local language, Papiamento, as you get lost in the culture and the sunshine. Though Aruba has battled to change its reputation following a very public murder case, the area is considered generally safe, especially in tourist regions. The local people are warm and kind, and often more than excited to offer all of the reasons why Aruba is worth visiting—no matter what the bad press says.

Here, a guide to your romantic Aruba honeymoon. 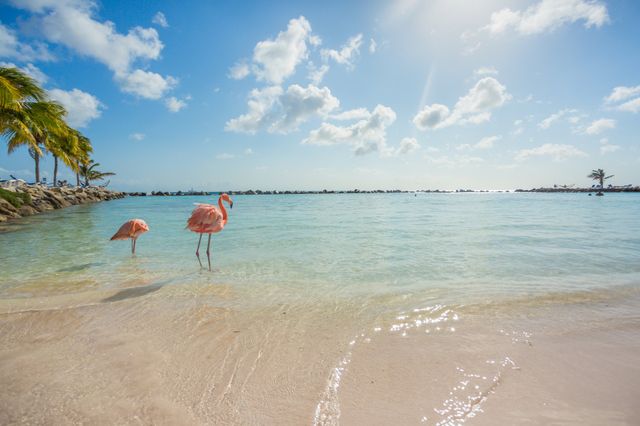 When to Visit Aruba For Your Honeymoon

More and more couples are going against tradition and booking their honeymoons for when it is budget-friendly—and not necessarily right after they said ‘I do.’ To save money, avoid taking off to Aruba from January to March during their peak season, when rates at many hotels and resorts are at their tip-top price. Instead, go from April to August when the prices are much lower… and the heat is high. Though it’ll be balmy and definitely a bit sweaty, with an air-conditioned room to retreat to, you’ll be just fine.

What to Do On Your Aruba Honeymoon

It’s recommended to rent a car for an Aruba honeymoon, especially if you’re an adventurous, curious couple. The island is bite-sized, but there’s plenty to see, do, eat and drink. Here, a few ideas:

Any suggestions for an all inclusive resort in Aruba for our honeymoon? Neither of us have ever been out of the country, the only place we ever vacation to is Orlando and I'm looking for something...

Hi everyone! I would love your opinion. FH’s family is planning our honeymoon and I am sooooo excited. My future father in law has reservations on hold in Maui and Aruba. He wants us to look at both...

My fiancé and I are starting to book our November/December 2021 honeymoon to Aruba. We are business owners and rarely have time for real vacations, so we are looking to go all out. When we usually...