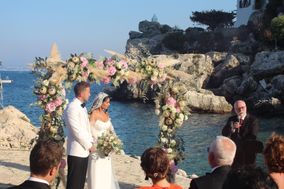 Humanist ceremonies in Sicily, Italy and Malta - From his base on the slopes of Mt Etna in Sicily, Richard has been performing personalised wedding ceremonies in English and/or Italian, French and German since 2009. He is willing to travel within Sicily, and also to nearby Italy or Malta. What makes... (Wedding Officiants Sicily)

Wedding Officiants near Sicily, IT

Search Beyond Wedding Officiants in Italy

Other Wedding Vendors near Italy