Crystal Ballroom at The Burt

About Crystal Ballroom at The Burt

The Crystal Ballroom at The Burt is an elegant wedding venue located in the historic district of downtown Hutchinson, Kansas. Built in 1901, The Burt was originally home to the Shaw Theatre but has since housed a cafe and auto repair shop, among other businesses. The building was purchased in 2017 with the intention of opening a museum, but the Crystal Ballroom was reopened and returned to its former glory. It is now available to play host to ceremonies and receptions.

The Crystal Ballroom offers various other locations for use during weddings. The nearly 15,000-square-foot venue contains a more intimate hall, two get-ready rooms, and a commercial kitchen. The ballroom can hold 190 of your closest loved ones for a seated meal, lit by glittering Maria Theresa chandeliers. Original maple floors give off a honey glow in the sunlight that comes through the numerous windows. Exposed brick walls add a modern, industrial edge to an elegant space. The adjacent Empire Room is attached to the Crystal Ballroom by large doors that can be folded back to create space for additional guests. This room can seat an additional 60 of your loved ones, bringing the total capacity up to 250. The Foxtrot Lounge and Tango Parlor are primarily get-ready rooms, but can also be used for a moment of solace from the busy occasion. The Tango Parlor houses a private powder room for the wedding party to use at their discretion. An onsite commercial kitchen can be used by your caterers for convenient, prompt service. Rhapsody on B, our newest venue, is perfect for ceremony. Matching the elegance of the Crystal Ballroom with gorgeous chandeliers, exposed brick walls and walnut flooring, you can seat up to 250 guests for your nuptuals then head straight up to the Crystal Ballroom for your reception and dance.

The Crystal Ballroom at The Burt endeavors to make your wedding as seamless and hassle-free as possible, and to this end, they offer a range of services. Couples who opt for this venue gain access to event planning software to aid in their coordination. Multiple amenities are provided to improve entertainment quality. A projector and screen can add an element of personalization to the space, whether you want to display a monogram or photos of loved ones. Tables and Chiavari chairs can be provided for meals, while special tables and barstools are available for cocktail receptions. The venue can supply a white throne-style loveseat, which offers great photo opportunities for the happy couple as well as guests. 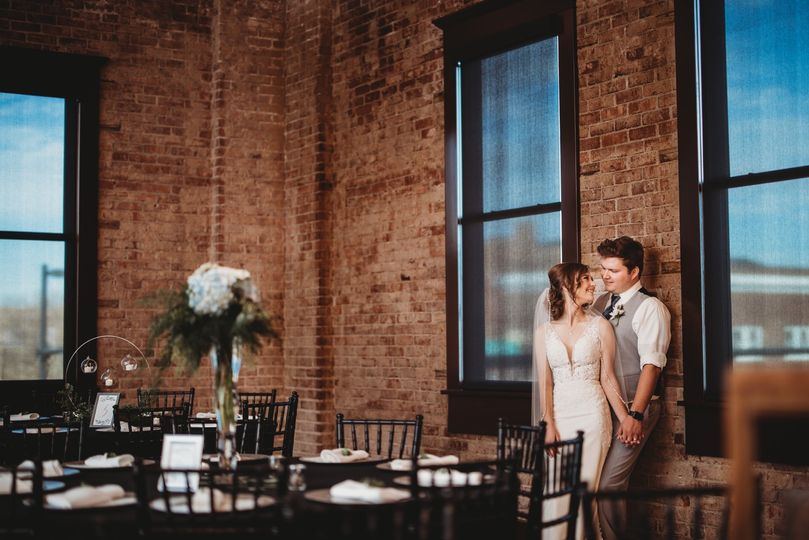 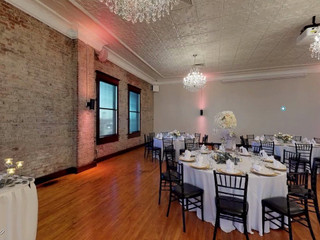 14 Reviews for Crystal Ballroom at The Burt

Crystal Ballroom at The Burt Pricing

Crystal Ballroom at The Burt FAQ

Team of Crystal Ballroom at The Burt

Lucinda Piligian was born and raised in Hutchinson. The fourth of the five Henninger girls, she literally grew up in her mother’s dance studio, Judy’s School of Dance. Crowned Miss Hutchinson in 1978, she studied dance for two years at K-State then packed up and headed to Hollywood! Lucinda performed in television commercials, TV shows and movies, but her role as Kelly (Special K) in the blockbuster cult classics Breakin’ and Breakin’ 2: Electric Boogaloo, are her claim to fame. After meeting her husband, Craig, Lucinda left the Hollywood scene to stay home and raise their two children and menagerie of animals.

In 2008, Lucinda bought a home on Main Street in Hutchinson. “I’ve lived in Los Angeles since 1980 – now that my kids are grown, I wanted to reconnect with my family.” Lucinda hired her sister, Kathy Bourell, to help her renovate the historic home. “Working with Kathy sparked a love of renovation in both of us! We are soul sisters. We think alike, talk alike, and share the same love of design, decor, food, family and dogs!”

Starting Flying Dog Properties in 2011, they bought a handful of small homes to fix up and rent. Kathy’s daughter-in-law, Brook Bourell, came on board to help out. “Hutchinson was still suffering from the economy crash and many people had lost their homes to foreclosure. We wanted to provide clean, respectable homes with affordable rent.”

Winwood’s Enchanted Playground, a universally accessible playground built in the River Banks Orchard Park in 2014, was Lucinda’s ultimate way of giving back to the community. “I love Hutchinson. I wanted to do something with real meaning to show how much this town means to me.” Working with the city to plan and build the Shane’s Inspiration Playground further influenced Lucinda to want to do more for Hutchinson.

In March of 2017, Lucinda and Craig bought the building on the SW corner of Avenue B and Main, now known as The Burt. “Our plan was to make it a folk-art museum. But I just couldn’t resist bringing back the Crystal Ballroom!” They also purchased the historic Yaggy Plantation and are deep into renovations on the two homes, built in 1892 and 1905. “Yaggy is a beautiful, country setting and will be a great addition to the Crystal Ballroom at The Burt. The homes will be perfect for families of wedding parties, reunions, or corporate retreats.”

Lucinda’s mission – “To have fun! Kathy and I pretty much fly-by-the-seat-of-our-pants! We learn as we grow and build. We laugh a lot. (Oh yeah, there are tears too!) It makes sense that we are in the hospitality business because we both want others to feel good and have fun too. Family and friends are everything.”

Director of Marketing and Business Development

Sondra Borth has lived in Reno County for a majority of her life. Even though she moved a lot as a young child, her Dad finally settled down in Turon, KS when she was in middle school. After graduating from Fairfield High School, she attended college in Salina at Brown Mackie, majoring in Fashion Merchandising. Sondra went back to college, graduating from Hutchinson Community College and then Wichita State University with a bachelor’s degree in Psychology.

Sondra is married to Ron Borth, a family farmer in Arlington, KS. They have two sons and two grandchildren. She not only worked on the farm, but also worked in Hutchinson throughout her career, including Pegues department store to her latest work as Executive Director for Reno County Communities That Care.

“All of my adult life, I have worked in Reno County. I am very passionate about Hutchinson and I’m excited for this new adventure as Director of Marketing and Business Development for the Crystal Ballroom at The Burt.” It’s a given that Sondra will continue her commitment to the Reno County/Hutchinson Community.

Kathy Bourell is the Executive Director of Operations for Fair City Management, a company owned and managed by her sister, Lucinda. She has 30+ years’ experience in design from her work at her family floor covering business, Bourell’s Floors Inc. Since 2008, she has helped design and oversee multiple creative projects with Lucinda, renovating and creating beautiful homes and properties in Hutchinson and Reno County. “We love working together. We are two peas in a pod. We always joke that it takes the two of us to equal one brain. I am sure we are quite ridiculous at times. But, we love each other, and we love what we do!” Kathy is also blessed to work with her daughter-in-law, Brook. “Her help is why I can get done what I do.”

Kathy graduated from Hutchinson Community College, Phi Theta Kappa. She taught dance at Judy’s School of Dance, now Poetry in Motion, for 37 years. Her love of her students and watching dance of any kind is unrivaled. Her granddaughters’ dancing is paramount! A devoted mother of three sons, adoring grandma to four grandsons and two granddaughters, she is also dog-mom to Cooper and Max. Kathy’s greatest love is spending time with her family. She also loves to travel and shop.

Kathy has loved creating homes for tenants through Flying Dog Properties. Renovating The Burt building, including the Crystal Ballroom, and the homes at Yaggy have brought it up to a whole new level. “It has been such fun and extremely rewarding to see our visions coming to life. We are so excited as a company to introduce these spaces to Hutchinson and the surrounding communities. They are stunningly beautiful and one of a kind. It's time to have some fun!"

What items and services are included in the starting site fee at Crystal Ballroom at The Burt?

Crystal Ballroom at The Burt includes the following items and services for wedding events in its starting site fee:

What are the most important characteristics of Crystal Ballroom at The Burt in terms of venue type, style and location?

The space offered by Crystal Ballroom at The Burt for wedding events is known for:

What kind of indoor/outdoor options are available at Crystal Ballroom at The Burt for wedding events?

Crystal Ballroom at The Burt offers the following indoor/outdoor options for weddings:

What kind of wedding events does Crystal Ballroom at The Burt offer?

Crystal Ballroom at The Burt offers the following types of wedding events:

What services does Crystal Ballroom at The Burt offer for wedding events?

Crystal Ballroom at The Burt offers the following services for wedding events:

What furniture and decorations does Crystal Ballroom at The Burt have available for wedding events?

Crystal Ballroom at The Burt offers the following furniture and decor items for weddings:

What percentage of users recommend Crystal Ballroom at The Burt and which are the most valued aspects of their wedding services?

Crystal Ballroom at The Burt is recommended by 100% of couples who have used their services. Their overall rating is 4.9 out of 5 with the following breakdown: 5.0 in quality of service, 5.0 in professionalism, 4.9 in average response time, 4.8 in flexibility and 4.7 in value.
Write a review
Wedding Venues Wichita
Wedding Vendors Wichita