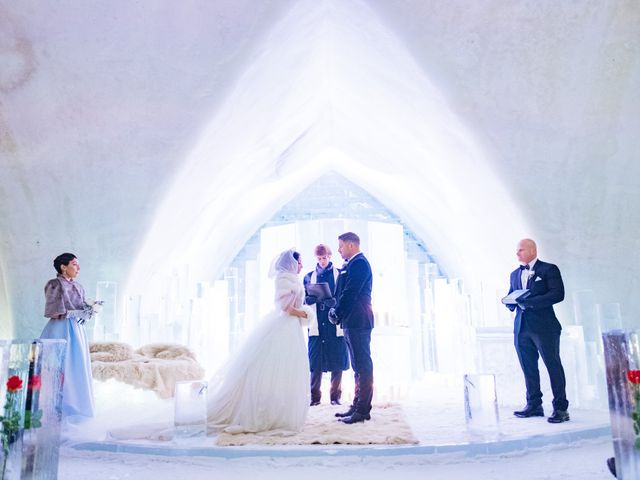 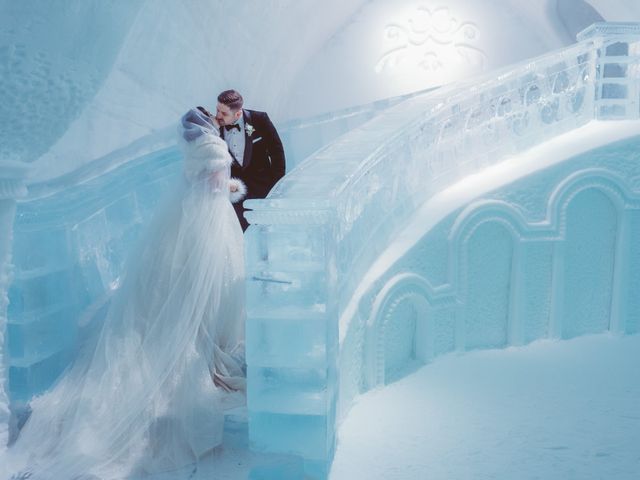 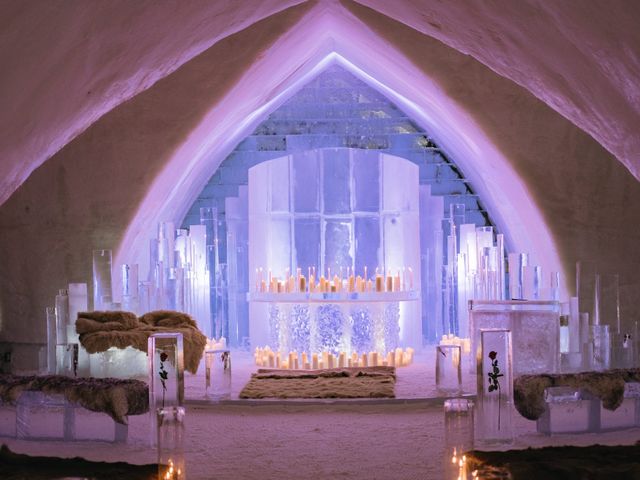 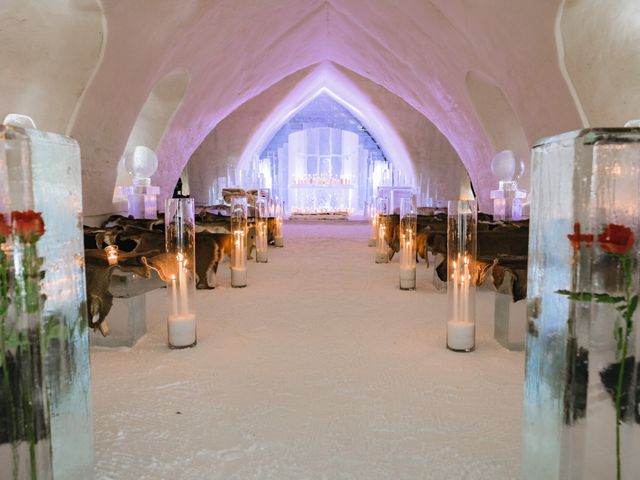 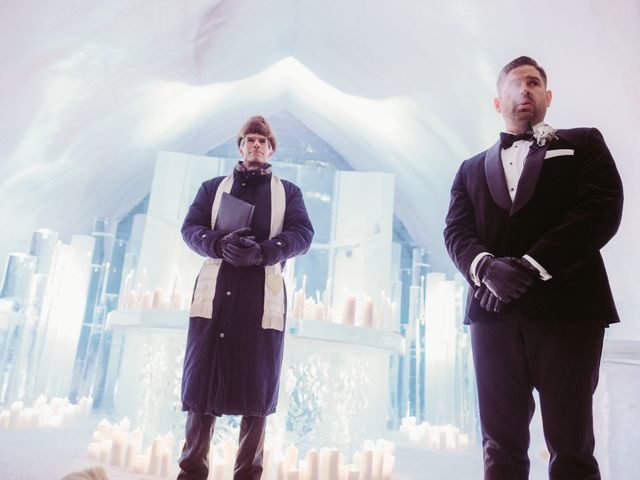 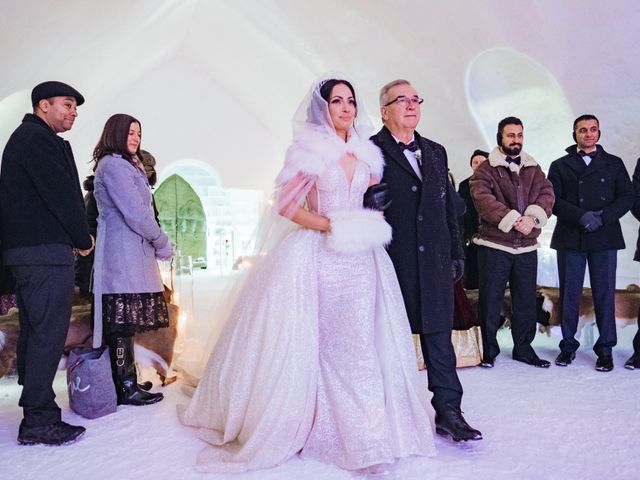 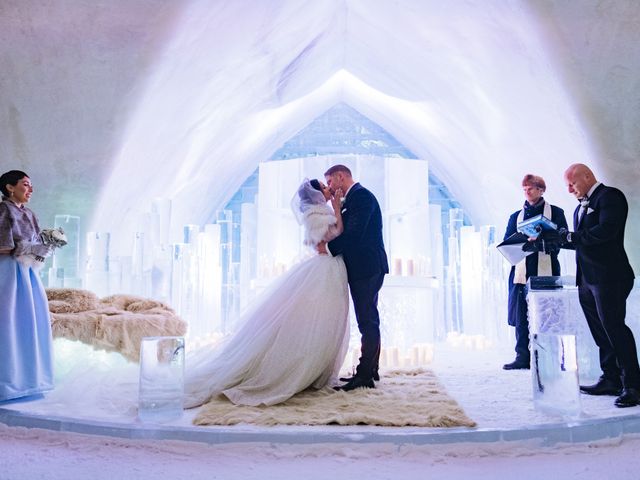 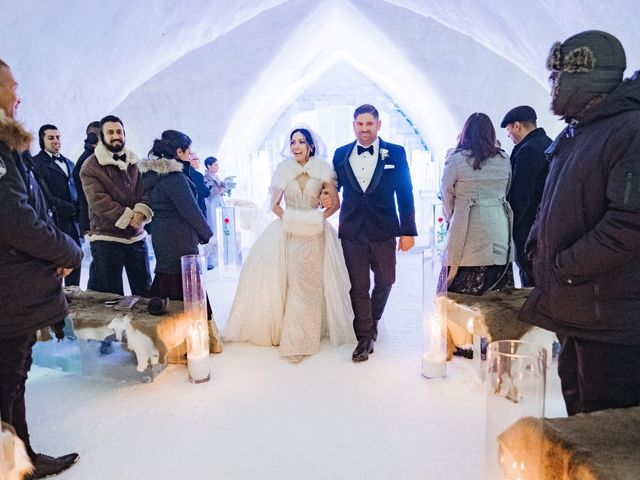 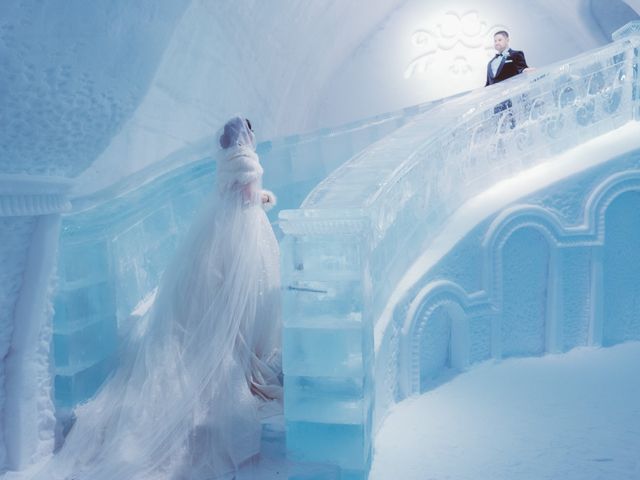 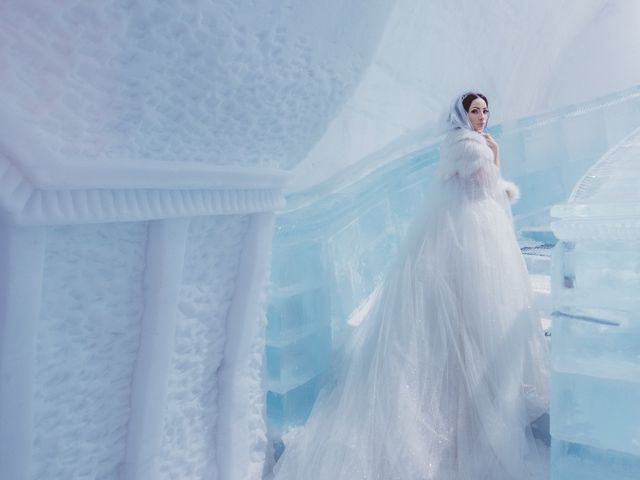 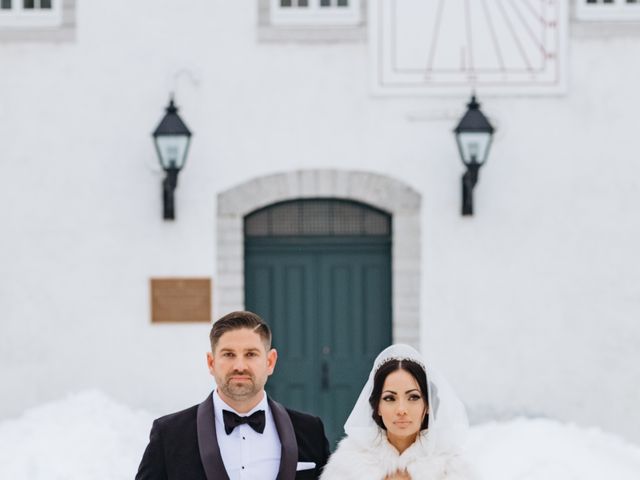 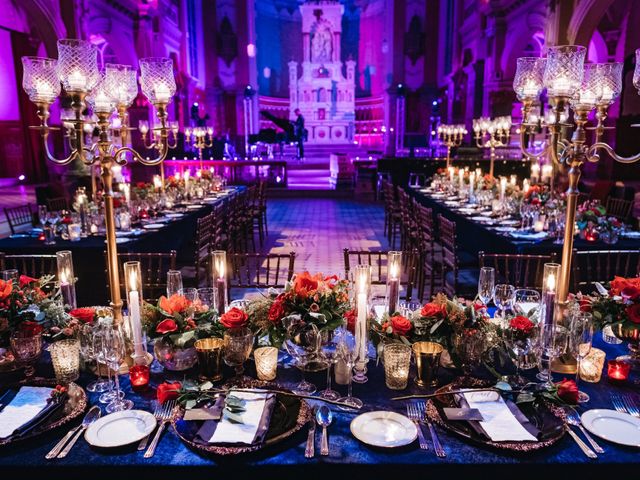 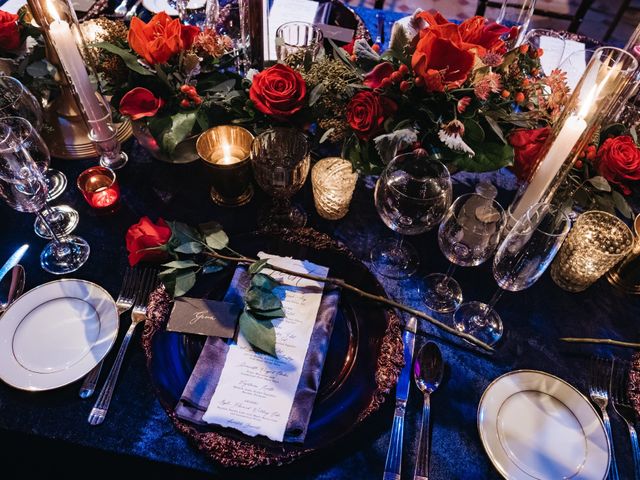 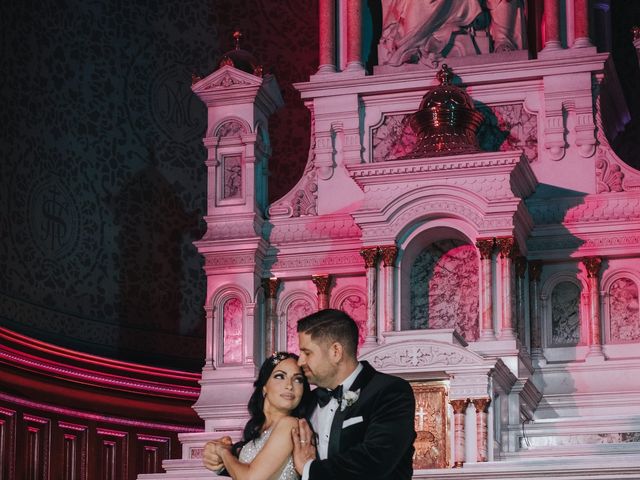 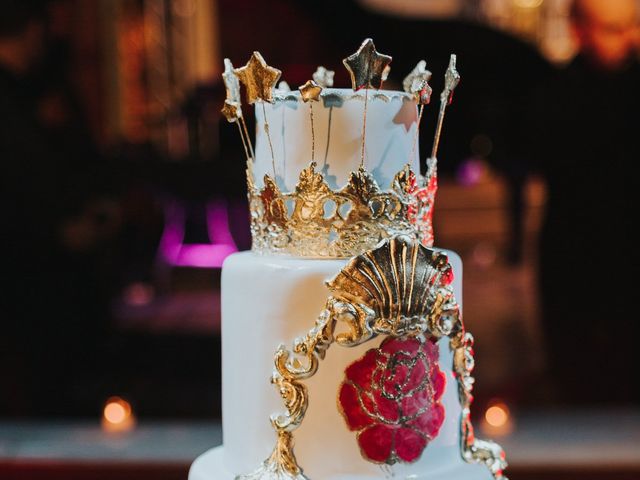 While we are both born and raised in New Jersey, our intimate destination winter wedding took place in Quebec City, Canada, a true winter wonderland. The ceremony was held in a chapel within an igloo made exclusively out of ice and snow at a hotel named the Hotel de Glace, or Ice Hotel. The overall theme of the wedding was "Romeo and Juliet." The Baz Luhrmann film, "Romeo + Juliet," was the inspiration, and the soundtrack from the film was played throughout the entire evening. During our evening ceremony, hundreds of candles illuminated the ice chapel and red roses were encased in ice. An electric violinist and live vocalist performed songs, some inspired by Disney and the icy venue itself, like "Let it Go" from Frozen and "Someday My Prince Will Come" from Snow White. As the groom and the rest of the wedding party walked down the aisle, "Like a Prayer" by Madonna was played as they approached the candle-filled altar. The bride walked down the aisle to the same song Juliet walked down the aisle to Romeo in the film that inspired the wedding. A horse drawn sled swept us away after the ceremony, as our guests lined up outside of the igloo, each holding a lantern in the darkness to send us off.

Our reception took place in Old Quebec within another chapel, this one a church from the 1900's that has been deconsecrated. The location was kept a secret to our guests. They entered through a modern basement where the cocktail hour was held, illuminated by neon lights and by the sound of a drummer playing modern rock and love songs. When they arrived at the romantic and dramatically lit reception space they gathered near the altar where our electric violinist and vocalist performed a dazzling rendition of “Ave Maria.” The bride and groom were then announced and danced their first dance on the altar to the song "Yellow" by Coldplay. The theme of a single red rose, signifying our singular and passionate devotion to one another, appeared throughout the evening, including encased within ice at our ceremony, emblazoned on our wedding cake, and laying upon our dinner plates at the reception. The theme of love as our religion, as depicted in the Baz Luhrmann film, was heavily featured on our invitations, which included a sacred heart and angel wings, and of course demonstrable in our choice of reception venue: a former Catholic chapel. The Maid of Honor’s speech was framed as a re-worked version of the prologue to the Shakespearean play, and Romeo and Juliet's "star-crossed" love was depicted in the names we chose for our signature drinks, like the “Love Potion” and our “Star-Crossed Sangria.” Dinner was served upon blue velvet tablecloths topped with scarlet flowers, gold candelabras, single red roses placed upon our plates, and endless candles, as a cellist and pianist played modern love songs while we feasted. Afterwards, we danced to the sounds of a DJ and electric violinist until 3:00 AM in the romantic and beautifully lit chapel. 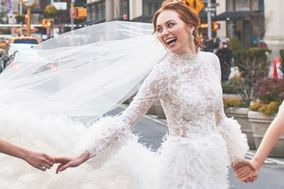 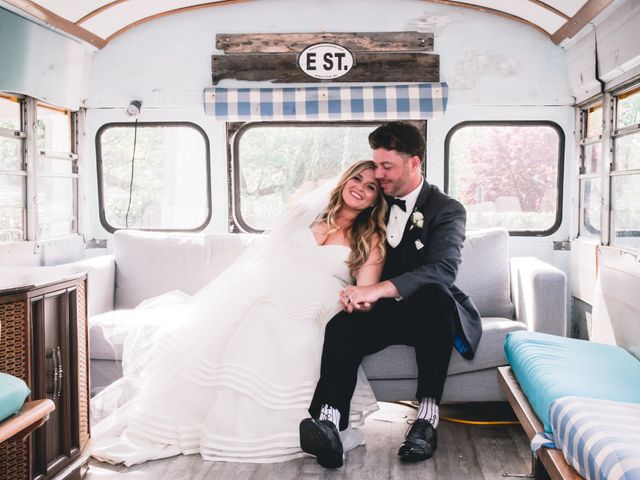 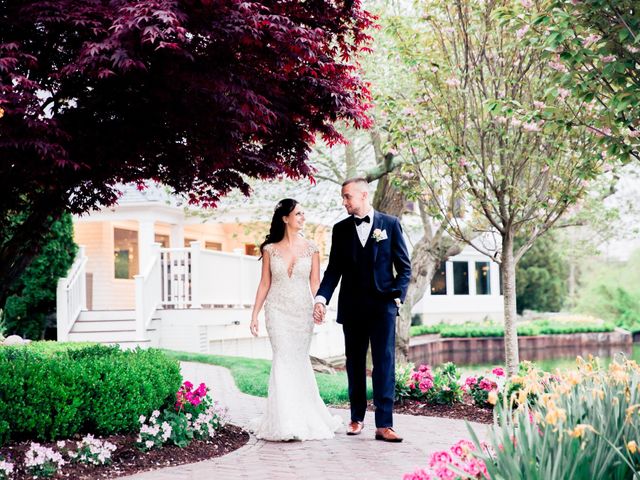 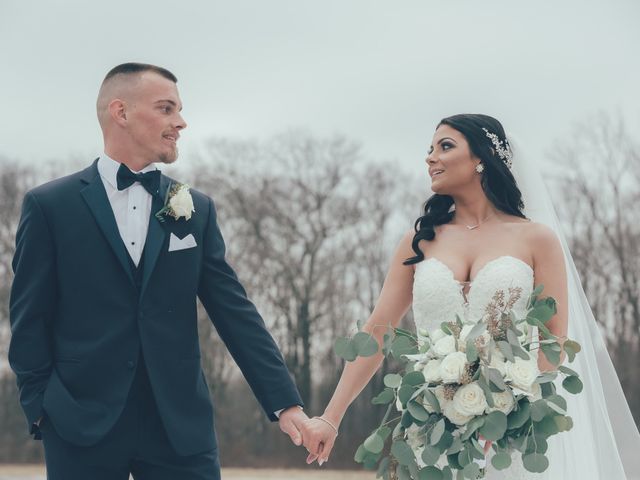 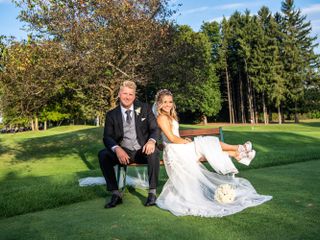 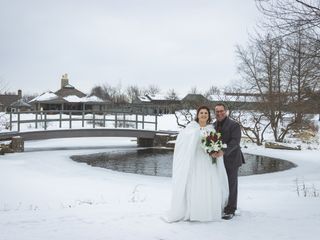 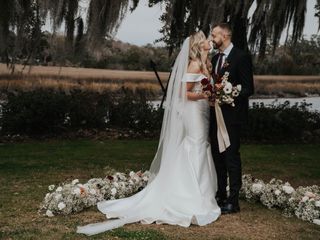