FH and I went and did our registries at Macy's and Target yesterday. Oh my gosh! I didn't know it was going to be so difficult! FH wanted one thing, I wanted another... we didn't agree on bedding nor bathroom stuff... we didn't get china (that's too "stuffy" for us, and at $150 a setting... that's ridic)... and he registered for random stuff: an outdoor thermometer and a fire pit (um, we don't even have a patio), a tools set with a drill AND another separate drill (he's saying "they're different"), 2 types of beverage dispenser thingies (one for water and the other for tea, OF COURSE), 193752 knife sets (lol), and 2 water guns. Lesson of the day: don't give the scanner gun to FH. I registered for the important stuff, like the beer mugs, margarita glasses, margarita maker, martini glasses, and a gig a$$ shaker

What is something "random" you or your FH/FW/DH registered for??? (cont'd) 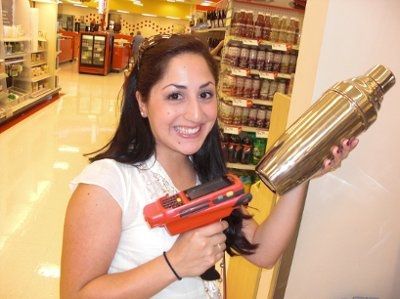