No children at the wedding...please tell me I am not the only one!!!???

Don't get it wrong I love children. I am the oldest on my fathers side of 26 grandchildren. I have watching kids my whole life! I can't wait to have children of my own but I don't want kids at my wedding. The environment is not right for kids. The venue is on a cliff over a lake ( dangerous when drunk parents and adults are not watching their kids). How many times I have watched family wedding videos and someone's baby is screaming in the background over the vows!!! NO MA'AM! I am not doing it. Its on the website and I have a little blurb about it on the back of the save the date post card. It reads...We are thrilled to have family and friends coming together to share our special weekend. Please do not be offended by our request but our wedding is adults only (no children). This will be an adult environment and somewhat inappropriate for small children. We are trying to keep their best interest in mind. Thank you for respecting our request...........Am I the only one ladies?!!! 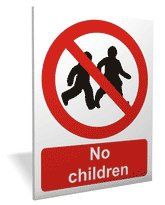