Mini bam. Big bam later. Updated with a few quotes from the day!

Just wanted to say a quick hello ladies! We're on the honey moon, and DH and the dog are napping. The day had some hiccups but nothing that couldn't be handled.

still cant believe I got to marry my best friend! Here's one of my favorite nonprofessional pics to tide you all over!

Oh and here is the best way to describe the day in a nut shell!

What i heard from every guest: 1) you are the most beautiful bride. 2) your brother was an awesome officiant. He nailed it. 3) the dr who theme is awesome! I love the daleks!!! 4) this is the most fun wedding i've ever been to. 5) who is that kid on the dance floor dancing up a storm? He is really good! (Codys cousin lane is twelve and loves to dance and was just killing it out there all night) 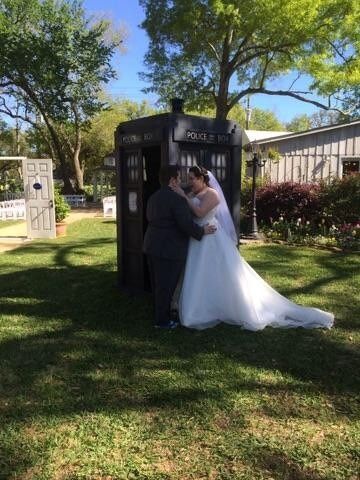