Well, actually... my mom found it via the internet a couple months ago and I wasn't entirely sure if I would like it. But she said it looked like me and that even Dad got teary eyed at the internet photo. When we got to the boutique, it was the only sample available from the photos that I had printed as "suggestions" so I told my consultant that I wanted to try that one on last.

All I can say is... this is one time I LOVED that mom was right! I got goosebumps in the dressing room and held back the tears. Once I walked around the corner and caught Mom's eyes we both broke down in tears! She just barely got out the words, "That's the one!"

Granted the sample I tried on was about 2 sizes too small but I'm sooooooo excited! Now it all seems so real!!

Attached are photos of the front, back and with the veil (we'll be adding the blusher also)... what do you gals think? 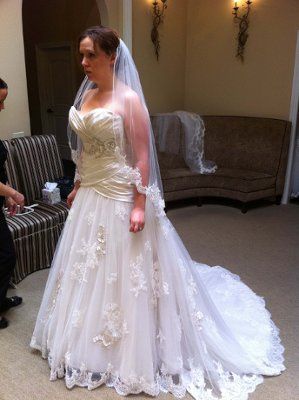