About The Recessionals Jazz Band

Contact Martin for more information on our WeddingWire Promotion!

You can also read more of our reviews at our website: www.Recessionals.com

Born out of the recession in 2009, The Recessionals Jazz Band began as a band of buskers in Washington Square Park where they cut their teeth playing hot and sweet jazz for the big apple. It was there in the park where they learned how to win over audiences and build their own performing style as a band, before moving on to audiences all over the east coast.Their album, Go For Broke, showcases the band playing classics jazz standards, gospel hymms, and fresh tunes inspired by the greats.

The band has performed at some of the most prestigious jazz haunts such as The Blue Note in New York City and Boston Swing Central, were pictured in the New York Times playing at a secret Bastille Day party hosted at The Shanghai Mermaid, and have been earning fans playing many of the jazz clubs in downtown Manhattan. A highlight included a performance at Louis Armstrong's House in Corona, Queens, NYC in summer of 2010. The Band can be seen performing frequently in Manhattan at Garage Restaurant, and Antibes Bistro.

In addition to performing club dates, the Recessionals are an experienced dance band who have played for many private events and weddings. Although they specialize in traditional jazz, they also perform a repertoire of jazz vocal standards performed in a contemporary jazz style with very talented female and male vocalists. Below is a link to some of our most recent music videos: 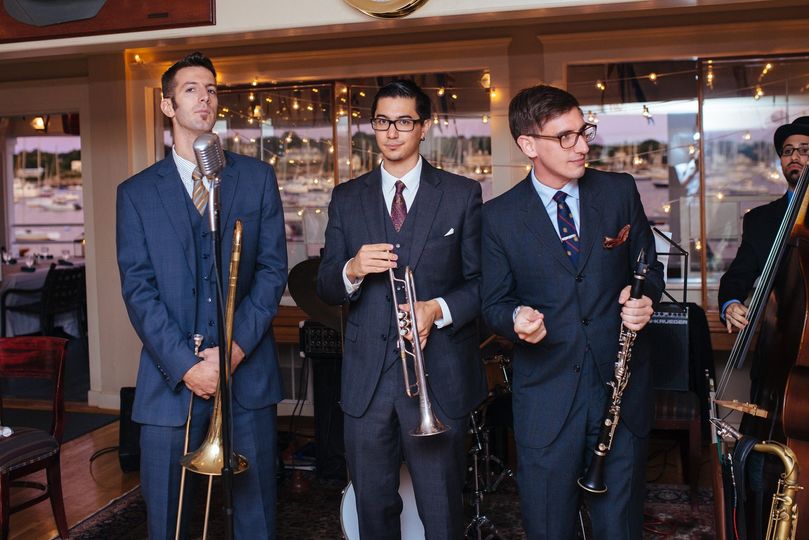 5 Reviews for The Recessionals Jazz Band

Write a review
4.8 out of 5.0
5 The Recessionals Jazz Band Reviews
Sort by:
See more reviews