Hire National Recording Artist Andre Cavor as your wedding saxophonist for your special day. The saxophone has always been associated with romance and sophistication. The saxophone is an instrument that appeals to all ages.

For your ceremony, Saxophonist Andre Cavor can play music as guests are taking their seats and eagerly awaiting the arrival of the bride - music is a great way to break the anticipation and tension. He can then play a request for the bride's entrance followed by a piece of music during the signing of the register and couple's exit.

After the ceremony, Andre can move his equipment to the drinks reception and continue to entertain your guests during the canapés and photographs.

You may choose to book Andre for your wedding ceremony, drinks reception and meal or any one of these.

A solo sax player doesn't need too much room if you are short of space - he can play standing up and just need a corner or small area to fit his amplifier or PA system.

You can also hire Andre to perform with his entire band as well. 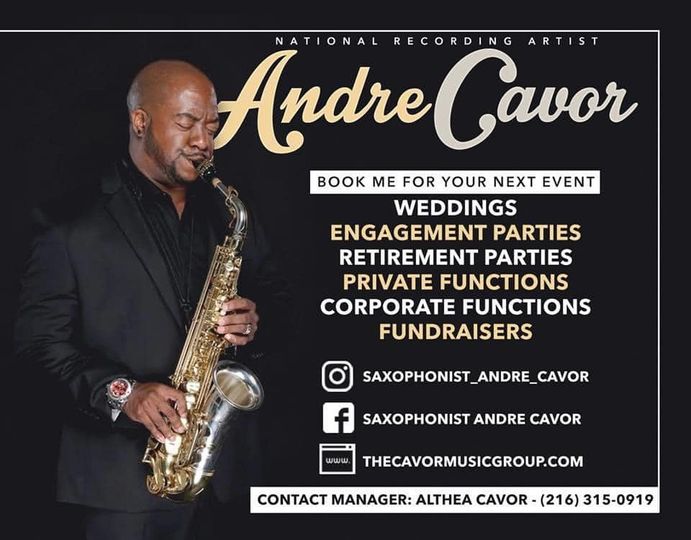 The title of Andre Cavor’s 2017 debut album Road Trip turned out to be an inspiring, self-fulfilling prophecy, setting the multi-talented Cleveland based saxophonist on an incredible journey that has established him as one of contemporary urban jazz’s most acclaimed and innovative independent artists.

Produced by Darren Rahn, fellow saxophonist and renowned artist who has worked his studio magic for genre greats like Kirk Whalum, Jonathan Butler, Dave Koz, Eric Darius, Jeff Lorber and the late Wayman Tisdale, Road Trip is that rare visionary project that achieved transcendent success while defying the conventional industry wisdom that tells artists they must limit themselves stylistically. The collection finds Andre unabashedly sharing his lifelong love for pop, jazz, R&B and gospel music, drawing from a lifetime of musical influences and experiences to create a passionate, high-energy masterwork that truly comes from the soul.

Fans across the U.S. and beyond agree, as the first single, the Andre-penned title track “Road Trip,” has received substantial airplay everywhere from Las Vegas, Panama City, Cleveland and Houston to Birmingham, Seattle, Boston and over in the UK. The track hit #13 on the Billboard Smooth Jazz Songs chart – an incredible achievement for an indie artist with his first commercial release – and #4 on the Smooth Jazz Network Top 20 chart. It was also received substantial spins on XM Sirus Radio’s Watercolors channel. In addition, famed Cleveland dance instructor Robert Johnson, Jr. created a “Road Trip” line dance that became a sensation in numerous cities. When Andre attended a line dance convention in Las Vegas, he witnessed 1000 people performing the dance simultaneously. Road Trip’s second single “Ready or Not” was released in April 2018.

Andre received major critical acclaim as well, making the 2017 Top 10 Critic’s Picks Year End list in Jazziz Magazine and earning the praise of Ronald Jackson of the influential taste-making website The Smooth Jazz Ride. Jackson wrote: “(Andre’s) emotional power, his drive and the substance of his strong material is not only satisfying to the ear but most inspirational. Few express their passion via their instrument better than he does. The album, a very melodic gem, does a wonderful job of bringing the two genres together with love and insight. There are grooves meant to move the feet and head and there are tracks to move the spirit…and there are tracks that do both simultaneously.”

Andre laid the foundation for Road Trip with hundreds of performances as leader of The Cavor Project, which has been a mainstay on the Cleveland music scene since 2007. The band is known for infusing fresh, explosive energy into vocal and instrumental classics from the 80’s through 2017 and spicing up their set list with dynamic originals. Featuring 11 of the most acclaimed musical talents in the city – five band members, five vocalists and a hip-hop artist – The Cavor Project performs a grooving mix of R&B, smooth jazz, hip-hop, reggae, pop, blues, rock and gospel. Since the release of Road Trip, Andre has headlined gigs featuring his own material with several members of The Cavor Project at Cleveland hotspots like Nighttown and the Take 5 Jazz Lounge, Blu Jazz in Akron, OH, Margaritaville in Hollywood, FL and Martini Blue in Houston, where he sold out four show over two nights in February 2018. Andre has also opened shows for top R&B vocalists Will Downing, Glenn Jones and Regina Belle (in Miramar, FL).

Andre is currently working on his follow-up album, Re-invention, tentatively set for release towards the end of 2019. Produced by Leon Turner, longtime Musical Director and producer for Gladys Knight and recent NAACP Award winner, the collection will feature many fresh Andre originals in addition to his takes on classics by Debarge (“A Dream”), Herbie Hancock (“Watermelon Man”) and gospel great Walter Hawkins (“Be Grateful”). Andre released the single "Stay With Me Tonight" on 9/13/2019 off the upcoming album Re-invention. This is what Johnathan Widran had to say about it...

One of the great urban jazz success stories of the past few years, Andre Cavor’s 2017 debut album Road Trip and its compelling Darren Rahn-produced title track set the versatile, Cleveland based saxophonist/composer on an incredible, self-fulfilling journey that included substantial airplay on SiriusXM’s Watercolors and a hit on the Billboard Smooth Jazz Songs chart.

With the release of his latest “Stay With Me Tonight” – easily one of the sexiest, most sensual genre offerings of the year – Andre expands exotically beyond the pop, jazz, R&B and gospel music foundations that drove his stellar debut. He eases into our hearts into this balmy, ambience-caressed romance not with his horn but a stylish and sultry Spanish guitar intro before getting down to business with the inviting main sax melody, backed harmonically by those warmhearted strings. Just as we’re getting in the mood with the low tones of his tenor, Andre gets to the horn-textured hook and then surprises with a higher alto tone on the second verse, creating emotional contrast and cool sonic variety.

The subsequent intertwining of dark/light tones and intense, heart tugging twists take the vibe into a beautiful creative stratosphere. Coming off such resounding out of the box success with Road Trip, Andre could have easily just shared with us another leg of that same excursion. Instead, he takes us to deeper, more tropical places that showcase yet another facet of his ever-evolving artistry.